Ora Banda Mining has now received all assay results from first-pass regional air-core and brownfields reverse circulation drilling programs conducted earlier this year at its Davyhurst project north of Kalgoolie. A spectacular 5m hit at almost an ounce to the tonne gold from 127m headlined the results at Victoria Workings approximately 300m north of the Mulline Rose pit. 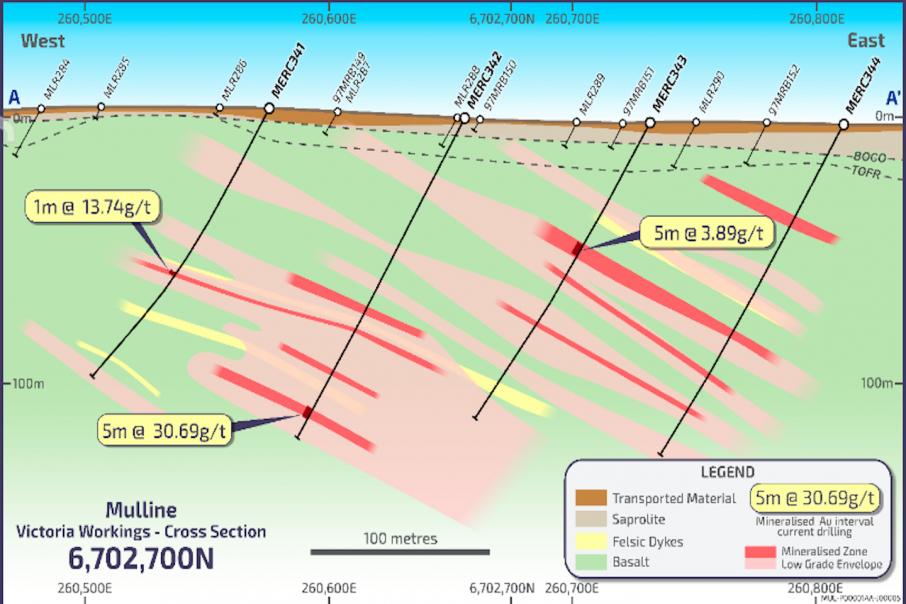 Ora Banda Mining has now received all assay results from first-pass regional air-core and brownfields reverse circulation drilling programs conducted earlier this year at its Davyhurst project north of Kalgoorlie. A spectacular 5 metre hit at almost an ounce to the tonne gold or 30.7 grams per tonne from 127m headlined the results at the Victoria Workings prospect approximately 300m north of the Mulline Rose pit.

The Victoria Workings prospect area is situated in the northern part of the Mulline gold corridor and is 38 kilometres north of the company’s operational Davyhurst processing plant and 6km southwest of its Riverina open cut mine. The area is about 160 km northwest of Kalgoorlie.

Several of the high-grade gold hits, including the 30.7 gram per tonne gold intersection, came from the southern part of the area, only 300m north of the Mulline Rose open pit. However, in the western area, another zone of high-grade gold has been delineated by the drilling and both zones are open along strike and the company says they require further investigation.

Additional drilling has been planned with the view to defining the extent and geometry of the high-grade shoots.

Results from the remainder of the aircore drilling include a significant intersection of 19m at 1.53 grams per tonne gold from 12m along the southern line at Sky prospect, which sits immediately north of the Sand King mine and east of Bewick-Moreing mine. This intersection is through a sand-covered area that has received little previous exploration and has now been flagged as a high priority target for further drilling.

A total of 85 aircore drill holes were drilled at Sky over four lines spaced at 400m with drill holes at 40m spacings. Rocks intersected were a mix of basalt, ultramafic and felsic porphyry lithologies beneath cover that averaged approximately 10m in depth. The best result was from a hole on the southernmost line that intersected 19m at 1.53 grams per tonne gold within a felsic porphyry dyke, immediately north of some small historical workings.

This felsic porphyry unit has been mapped for 450m along strike to the north where it is found in the east wall of the nearby Bewick-Moreing pit. There are numerous small historical workings along strike to the pit, whereas to the south, the unit is buried under sand. Mineralisation is open to the north and south and Ora Banda is planning follow up reverse circulation drilling to explore the extent of mineralisation identified, as well as additional infill aircore drilling to adequately test for narrow-vein style mineralisation in the stripped profile.

At the German Charlie and South Pole prospects, broad zones of low-grade mineralisation were intersected in highly weathered rocks, which may indicate potential supergene-rich gold halos at both prospects according to the company. Further drilling is planned to map the extents of the possible supergene halo and target the primary source in fresh rock.

Whilst waiting for the assay results to filter through, Ora Banda launched into a 9,000m aircore drilling program that commenced in September and will end mid-November. The aircore program will test an additional eight prospects and will also follow up on some of the higher-grade assay results from Victoria Workings and Sky.

Ora Banda Managing Director, Peter Nicholson, said: “We are greatly encouraged by the strong gold results coming from the Victoria Workings, just 6km southwest of the active Riverina open cut mine. We will be looking forward to continued drilling success in this area. The Sky result is also exciting and come from an area that has been rated as a highly prospective mineralised corridor extending out of the Sand King open cut mine. This area really is wide open and only lightly drill tested, which is surprising given its proximity to a very well mineralised gold system.”

The main Riverina deposit has a high proportion of oxide tonnes which make it an attractive source of open pit ore. The mineralisation is well-defined over a strike of approximately 1.2kms and remains open along strike and at depth. The company intends to test below and down-plunge of the historical Riverina underground workings as a potential source of future high-grade underground ore.

Riverina’s measured, indicated and inferred open-pittable and underground resources currently tip the scales at a combined 2.95 million tonnes at grades averaging 3.2 grams per tonne gold for 300,000 ounces of contained gold. Of that total, Riverina Underground accounts for one million tonnes at a solid grade of 5.6 grams per tonne for 183,000 ounces of contained gold.  Importantly, the company says gold mineralisation at Riverina Underground is still open to the south and at depth on three prospective shoots.

Ore feed for Ora Banda’s recommissioned 1.2 million-tonne-per-annum- Davyhurst plant is currently sourced from the Riverina open-cut, the Golden Eagle underground mine and from the new Missouri open pit. The hunt for new deposits to feed the processing beast is looking more promising with the latest batch of assay results.