Three major office projects have got the go-ahead in the city but it's the future project pipeline that concerns the city's consulting sector. 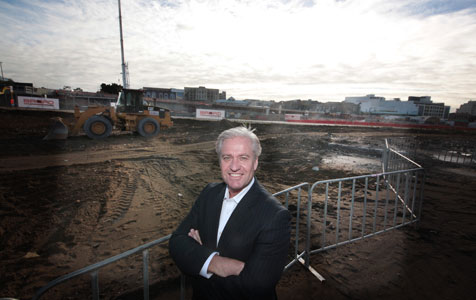 CONSTRUCTION: Leighton Holdings' Hamish Tyrwhitt was in town for the launch of his company's Kings Square development this week.

Three major office projects have got the go-ahead in the city but it's the future project pipeline that concerns the city's consulting sector.

The CBD is poised for a mini building boom as construction gets under way on three significant office projects in the city.

It comes in the same week that Leighton Properties initiated construction at its Kings Square precinct on Perth City Link land.

Along with the office component of Mirvac’s Old Treasury Building development and the expansion of the old May Holman Centre, these construction projects are equivalent to 10 per cent of Perth’s total office stock.

And according to Jones Lang LaSalle WA managing director John Williams, this figure doesn’t take into account any of the other proposed office projects currently seeking pre-commitments from city tenants.

“You can point your finger at about 160,000sqm which is committed to and about to start and we are in the final stages of the first two lots at Elizabeth Quay, and that (represents) the next phase of development,” Mr Williams said.

He suggested there was sufficient demand on the tenant side to kick-start at least one other city office project in the near future.

On the face of it this construction peak, along with the state government’s commitment to Elizabeth Quay, the underground bus station at Wellington Street and the new stadium, are a ringing endorsement of the local economy.

However continuing uncertainty has put the brakes on private sector investment in the state, according to Brookfield Multiplex’s Chris Palandri.

The construction and development group’s regional managing director has singled out the impending federal election as the cause.

“We are in that tremendous uncertainty that happens heading towards a federal election; it’s very clear the big privates are holding back on spending,” Mr Palandri told Business News.

“The market fundamentals still seem to be there to make projects viable, but market sentiment and uncertainty and the political issues taking place at the moment really put people off.

“Why make a decision now when you can delay it until there is a more certain environment?”

Brookfield Multiplex is in the running for a number of high-profile projects in Perth, including the first development plots at Elizabeth Quay, Crown’s new $500 million hotel, the stadium, and the underground bus station at Wellington Street.

And with a tenant pre-commitment in place for Brookfield Place Tower 2 its current workbook is looking pretty full; but Mr Palandri acknowledged the outlook was much less certain for a number of future state government projects.

It’s the uncertainty surrounding this next wave of development – coupled with the impact of the slowdown in mining investment – that has the city’s architects nervously scanning the horizon.

The Metropolitan Redevelopment Authority is expected to unveil the successful bidder for the first lots at Elizabeth Quay within weeks and the shortlist for the new stadium has been narrowed to three parties, including four local architecture offices and two international firms.

Beyond these two once-in-generation projects, however, the opportunities are thin on the ground for a number of the top-end design firms.

Private sector investors and developers are grappling with the impact of the spending pullback in the mining industry, weak business confidence, and the destabilising effect of the looming federal election.

Head of WA chapter of the Australian Institute of Architects, David Karotkin, said most architecture offices had slimmed down in the past 18 months and there was a heightened sense of nervousness about where the market was headed.

“The most common thing to do is to pull your head in and reduce costs by laying people off … and a number of offices have gone to four days a week to keep their people,” he said.

Competition has increased for projects in WA as east coast firms look west for new opportunities, and Mr Karotkin said there was also competition from a number of major international firms.

The Perth offices of Hassell and Cox Architecture are working in partnership with Brookfield Multiplex and US architects HKL to bid for the stadium development.

The other two groups shortlisted for the project are Confidem, a group including architects Woods Bagot and John Holland, and a third consortia made up of ProBuild Constructions working alongside UK-founded architecture firm Grimshaw and Perth firm JCY.

A win on Elizabeth Quay or the stadium will shore up the immediate future for the local architecture firms that have contributed to the million-dollar price tag associated with pitching for these complex projects.

A loss may force them to look seriously at job cuts, according to one senior consultant.

“The market is getting soft, there are not a lot of extremely large projects out there … and while there is some interest (in new development proposals) around the place, nobody is doing a lot,” he said.

“We have noticed, particularly among the engineering consultants, there has been a reasonable amount of redundancies and the design industries are facing the same thing.”

Woods Bagot is more upbeat about the outlook, and director Mark Mitcheson-Low said the business had a strong pipeline of work in WA, including the second tower at Brookfield Place.

“I think it’s more about confidence; when it starts to wane everyone starts to look forward,” Mr Mitcheson-Low told Business News.

The apartment sector is the strongest slice of the property pie at the moment, particularly at the entry-level price point of between $500,000 and $700,000.

It’s a segment on which Pindan property development and investment arm Otan has set its sights, targeting capital investment of up to $300 million.

These projects are a combination of land sub-divisions, apartment developments and infill housing, according to Otan managing director Mark Butler.

“We are probably at the opposite end where there are more transactions than there is capital, but the capital still seems to be moving more rapidly to Perth still,” Mr Butler said.

“The resources sector has had a bit of a rattle but the fundamentals are still there. If you go to Karratha the ships are still coming and going at a great rate of knots, both for the LNG and the ore; it’s more the exploration people who have had a bit of a jolt.”