Fittingly for a restaurant he has named Odyssea, owner Fabio Hupfer undertook a lengthy journey before he could open the doors at his City Beach eatery. 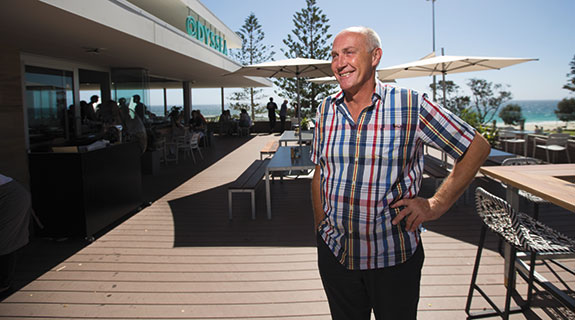 Fittingly for a restaurant he has named Odyssea, owner Fabio Hupfer undertook a lengthy journey before he could open the doors at his City Beach eatery.

Like the protagonist of the Greek poet Homer’s masterpiece, Odyssey, Mr Hupfer has travelled a vast distance across many oceans.

Rather than facing off with Poseidon or sea monsters along the way, however, he has worked his way through a 40-plus-year career in hospitality in high-end hotels across the world, finally making landfall in Perth almost three decades ago.

A chef by trade, Swiss-born Mr Hupfer worked in roles from the kitchen to senior management at hotels across Europe, North America and Africa prior to moving to Western Australia in the late 1980s.

It was in Northbridge that Mr Hupfer opened his first Perth venue, a little Italian restaurant on the corner of Lake and James streets.

“To my knowledge, we were one of the first, if not the first, people to cook pasta fresh in front of customers,” Mr Hupfer told Business News.

“At the time, you couldn’t buy pasta cookers in Western Australia, so I converted a deep fryer into a water cooker and I cooked fresh pasta for our customers.

“I did that for many years … that was exciting. It was a tiny little shop that was quite amazing, people embraced it.”

And it’s that sort of success Mr Hupfer is looking to recreate at Odyssea.

His most recent two ventures, Metrio & Co in North Perth and Hubbles Yard in East Fremantle, both gained cult followings in their respective communities.

And if the crowds flocking to the 300-seat City Beach restaurant are any indication, Mr Hupfer is on a similar track.

Odyssea opened its doors to much fanfare in January, with the demand for tables at the ocean-side venue providing Mr Hupfer with an interesting challenge.

“We wanted to open the gates with a little trot, then a gallop, and then a sprint, but the sprint was instantaneous,” he said.

“It’s a nice problem to have, to have too many customers, but it still creates issues.

“We have promised the customers a certain standard in service and in quality, and with the influx of customers, it is challenging to maintain that standard, it really is.”

Odyssea’s menu is built around Western Australian produce, with the offering to change with the seasons, depending on what is fresh and available.

Mr Hupfer said that commitment to local produce, as well as high standards of quality, meant dining at Odyssea was a unique experience in Perth hospitality.

“A lot of people ask me why Odyssea, is there a meaning behind that?” he said.

“Most people think Odyssey is just a car, or it is music, like Ziggy Stardust, but Odyssey is actually the Greek story of Homer and the Iliad.

“The young prince goes out to the Mediterranean to find his experience and be worldly for his future as the king.

“What we do here is we want our customers to come to us in a relaxed beachside setting, which gives them above-standard experience in food and service and ambience, and we take them on a journey.

“The view is good, yes, but there is more than that; it’s the whole experience, it’s the journey.”