Nzuri Copper has produced its best copper hits yet from a target area immediately along strike from the Kalongwe project in the DRC, opening the door for a possible significant extension of mine life. Drill hits of up to 7.7% copper were accompanied by encouraging cobalt intercepts, all at shallow depths and within 5km of the flagship project. 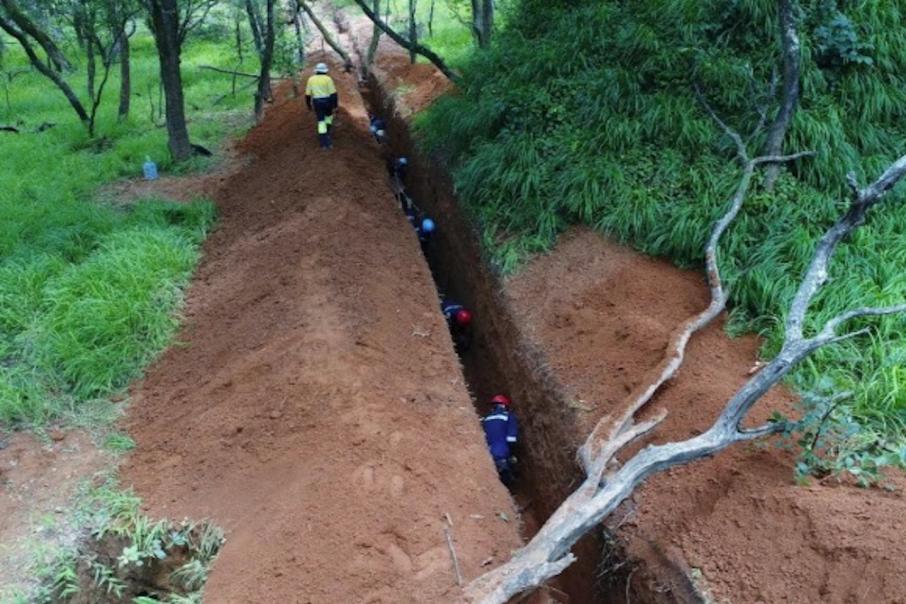 Exploration trenches at Nzuri Copper's Monwezi 2 prospect in the DRC

Nzuri Copper has made more impressive shallow, high-grade hits of copper and cobalt along strike from its flagship Kalongwe project in the African Copper Belt, opening the door for a possible significant extension of proposed mine life at the project.

The latest round of intercepts are from newly received assays of recent drilling in the Monwezi target area, located between 2 and 5km along strike from Kalongwe in the Democratic Republic of Congo.

The results featured 20.2m at 1.85% copper from just 47 metres downhole, including 7.5m at 2.39% copper, which Nzuri said were the best intercepts to date from the Monwezi 2 target area. The best 1m samples assayed up to 7.7% copper.

Drilling was designed to test the shallow portion of the deposit, and has proved that upgrading of the potential copper resource occurs in the shallow, or  “supergene” depths.

Significantly, drilling and trenching has now confirmed that mineralisation at Monwezi 2 extends over a strike length of 300m to a depth of at least 150 metres.

The company will immediately follow up the latest results with four step-out holes along strike, which are expected to lead to a resource drill out and mineral resource estimate.

The latest assays also produced encouraging high-grade, shallow intercepts of cobalt from the Monwezi 7 target area, including 3m at 0.11%, 2m at 0.23% and 8m at 0.2% cobalt.

Ivanhoe is keeping a close watch on ground in the surrounding area and is Nzuri’s partner in the Fold Thrust Belt joint venture that includes a host of exciting looking targets.

In a statement to the ASX, Nzuri said the latest drilling results confirmed the potential to define additional cobalt and copper resources at Monwezi, with the potential to significantly extend the proposed Kalongwe mine life.

Nzuri hit the ground running in 2018 with the backing of a $10m capital raising from new cornerstone investor, Huayou Cobalt, the world’s largest producer of cobalt chemicals.

Key contracts have been awarded for the Dense Media Separation Stage 1 project development and  potential expansion studies that will lay the foundations for Stage 2 of the Kalongwe copper-cobalt project.