TSXV-listed Novo Resources has made its final payment of A$3 million in cash and issued 1,198,395 shares to the vendor to wrap up its acquisition of the Comet Well project in the Karratha region of Western Australia. The Comet Well deal comes just as Novo starts to pull dirt from its Beatons Creek gold deposit that it is looking to treat at its newly refurbished Golden Eagle plant south-east of Nullagine. 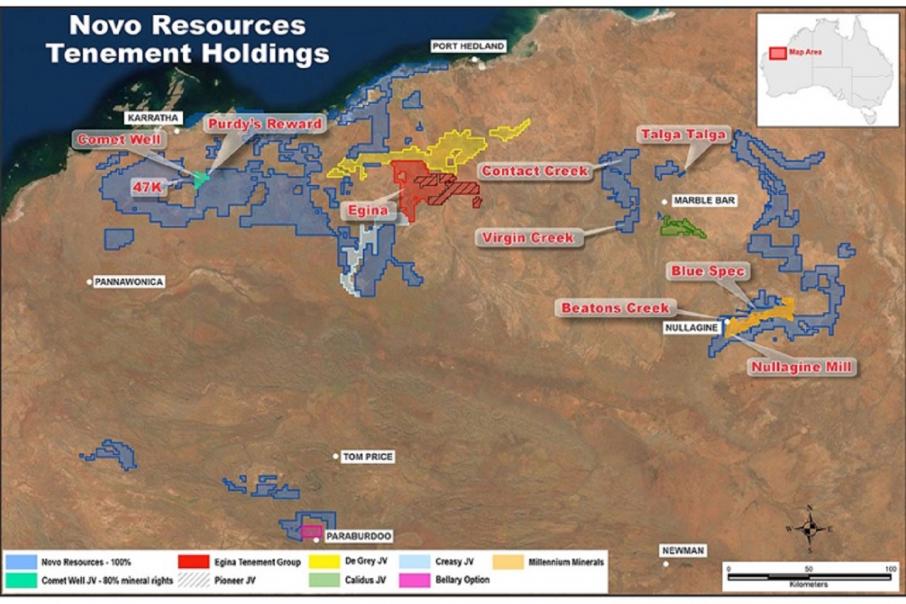 TSXV-listed Novo Resources has made its final payment of A$3 million in cash and issued 1,198,395 shares to wrap up its acquisition of the Comet Well project in the Karratha region of Western Australia.

Novo’s Comet Well project area sits adjacent to its 100 per cent-owned Purdy’s Reward property. Both are at the eastern end of its bevy of high-grade gold ground, the footprint of which covers over 400 kilometres of gold-rich terrane across the top end of the Pilbara.

Novo acquired an 80 per cent interest in the Comet Well project back in 2017 to chase a significant new conglomerate-hosted gold discovery located approximately 45km south of Karratha.

According to the company, prospectors first discovered gold nuggets at Comet Well around mid-2016 and Novo has remained very active in the area since.

The Canadian company has confirmed the gold was sourced from a package of previously unmapped conglomerates at the base of the Archean-aged Fortescue Group, the same unit that hosts Novo’s Beatons Creek project situated approximately 350km east of Comet Well.

According to Novo, gold nuggets in the matrix of conglomerates at Comet Well and Purdy’s Reward are typically coarse, greater than 2 millimetres and distinctly flattened, appearing like “watermelon seeds”.

The wrap up of the Comet Well deal is timely as Novo said it is inching closer to the start-up of its planned bulk excavation and field mechanical sorting trials across both Comet Well and Purdy’s Reward in search of a grab bag of flattened gold nuggets.

Gold purity of the nuggets is typically higher than gold derived from orogenic lode deposits in the underlying basement.  Historically separation from the host rock has been tricky and this is where the company’s new toy comes in – enter the Steinert mechanical sorter.

All going well with the State authorities, the company will be switching its mechanical sorter on in the second quarter of this year.

Novo Resources Chairman, Quinton Hennigh said: “We see the Karratha gold project, of which Comet Well is a part, as our next opportunity to build upon our strategy to grow Novo into a significant gold producer in the Pilbara region of Western Australia. We are now able to streamline processes to get our trial bulk sampling and mechanical sorting program permitted and underway. By late 2021, we hope to show the market a viable path forward for this very important project.”

The start-up of conglomerate gold sorting at Comet Well comes just as Novo is poised to join the growing ranks of WA’s gold producers.  Dirt from its Beatons Creek gold deposit is already heading toward its re-commissioned Golden Eagle plant south-east of Nullagine, with an inaugural gold pour looming over the Mid West’s eastern horizon.

The company’s coveted move into production is the realisation of a long-held belief in the Pilbara region’s endowment of conglomerate-hosted gold mineralisation.

Since its humble beginnings, Novo has expanded its holdings to create a massive footprint of almost 1,400 square kilometres of ground containing the geological features which host the lucrative conglomerate-gold mineralisation. The spread of ground now stretches from Karratha in the west to Marble Bar and Nullagine in the east.

With Novo’s Golden Eagle plant about to ride again, the resources sector will be watching with interest to see how well the company is rewarded from its conglomerate gold horizons.