Novo Resources is building up excitement at its Egina project in the Pilbara, WA, after a bulk sampling program of surface gravels recovered significant quantities of gold nuggets at grades well above typical alluvial gold deposits. The company said the gold is coarse enough to extract without using water and is evaluating whether the ores could be extracted using simple and cheap mining methods like continuous mining. 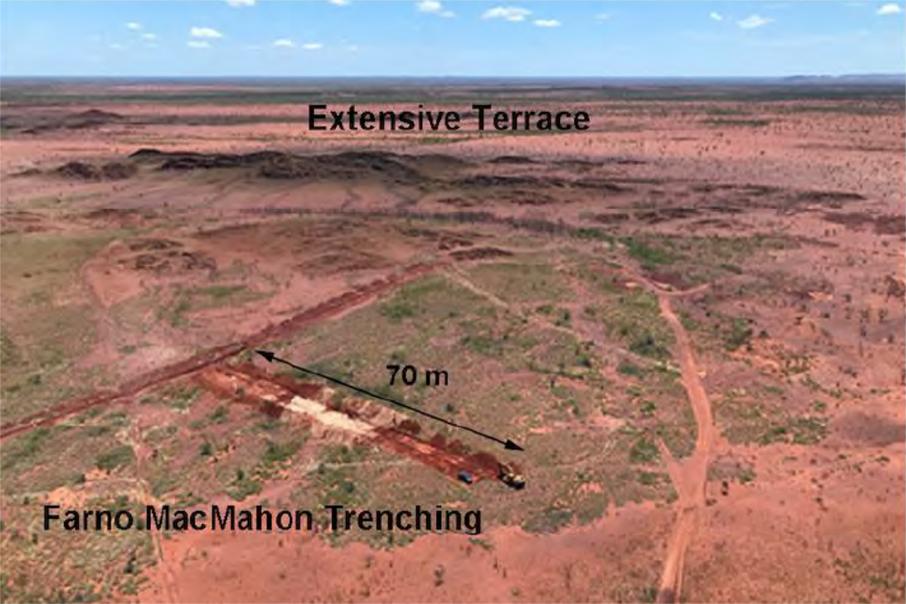 Following on from last week’s positive results of significant quantities of nuggetty gold from preliminary trench sampling at its emerging Egina gold project, Novo Resources has revealed that it had recovered further coarse gold from four test pits located nearby.

Metal detecting and gravity processing of 281.9 cubic metres of the sought-after gold-bearing gravels unearthed 292.38 grams of nuggets, a result the company said was very encouraging, given that many alluvial deposits come in at grades well below 1 gram of gold per cubic metre excavated.

Unlike conventional hard-rock gold deposits, alluvial or water-deposited gold deposit grades are commonly reported in grams per cubic metre, rather than grams per tonne.

Field analyses of the Egina nuggets indicate gold purities ranging from 89% to 95%.

The gold-bearing gravels are located at the surface just below sandy soil cover and Novo is now evaluating whether the ore materials could be extracted using simple and cheap mining methods like continuous mining.

Continuous miners are used extensively in the underground coal mining industry and were successfully employed by Fortescue Metals to extract its low-grade, surface outcropping, flat-dipping iron ore horizons in the Pilbara region of WA.

According to the company, all gold recovered from the recent sampling exceeds 1 millimetre in size, which is coarse enough to extract using “dry” methods and techniques without the need for water.

Novo is now investigating other processing technologies to recover gold from the Egina project, given the enticing results from its initial bulk sampling exploration activities on-site.

Management said that sampling was completed across a 64-metre wide nugget-rich zone within a broad topographic depression or “swale”, that was identified by an innovative ground penetrating radar, or “GPR”, survey, which is now being utilised to identify further targets across Egina.

Novo President and Chairman Dr Quinton Hennigh said: “Our first Egina bulk samples have yielded positive results in line with expectations. These first four samples were collected next to our recent exploration trench. Like our first bulk sample collected in late 2018 from an area approximately 100m west, these have yielded significant amounts of coarse gold.”

“We are quickly proving that the gold-bearing gravels can be effectively targeted, explored and quantified at Egina, which is a significant step for an extremely nuggetty project such as this.”

“In addition, we now clearly see that we are dealing with a shallow, easily extractable deposit dominated by coarse gold that could prove simple to recover.”

The presence of gold nuggets across a wide section of the swale has Novo convinced that gold-bearing gravels may be much more continuous and hence voluminous, particularly further east of the historical workings at Egina, based on the results of its recent GPR surveys there.

Company personnel have also detected gold nuggets embedded in a rock matrix in some coarse, sedimentary features located within the gravel beds.

These clasts appear as pieces of heavily weathered and ancient conglomerate materials that have retained in-situ gold nuggets.

The company recently said that fine halo gold also observed around these nuggets, much like that seen from other gold-bearing conglomerates near the company’s Karratha project, 130km to the west.

These types of technical observations and interpretations are driving Novo’s ongoing quest for payable conglomerate-hosted gold deposits in the broader Pilbara district, where it holds about 13,000 square kilometres of prospective ground.

In May, the company entered into a USD$30m farm-in and JV agreement with diversified Japanese trading company Sumitomo Corporation to accelerate the development of the Egina gold project, which outlines clearly that that company is also invested in the emerging Pilbara conglomerate gold story.