Novo Resources has compiled a mineralisation report for its Karratha gold project in the Pilbara region of WA and outlined future work programs that include comprehensive, bulk sampling of up to 100,000 tonnes across the region. The company will undertake innovative mechanical ore sorting and scanning techniques on the samples addressing the unique, coarse nuggety gold distribution of the Karratha deposits to more accurately predict gold grades. 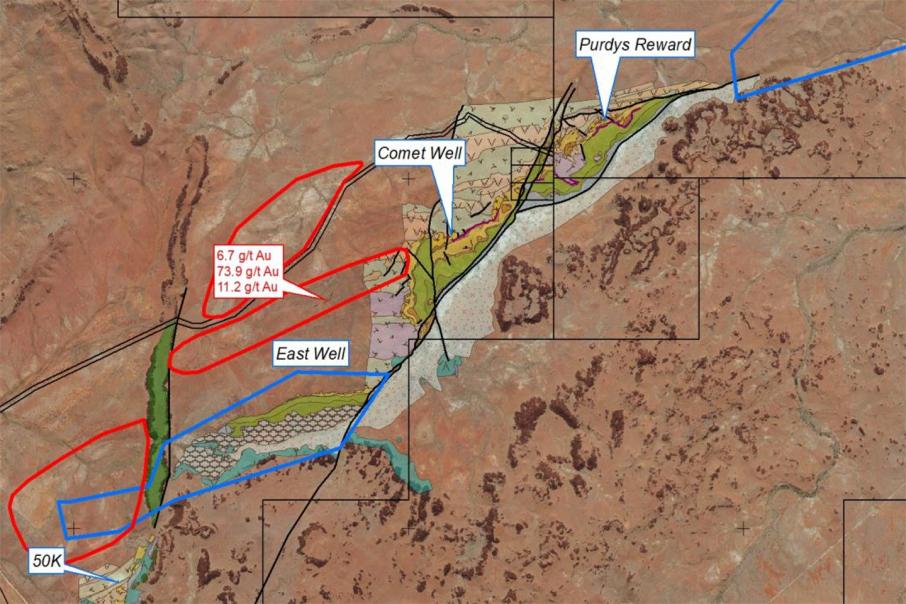 TSX-listed conglomerate gold developer Novo Resources has now compiled a mineralisation report for its Karratha projects in the Pilbara region of WA, which it says sets the course for its future work programs in the area.

The company’s mineralisation report outlines all the geological reconnaissance and exploration activities carried out in the area by Novo to date, including at the Purdy’s Reward project to the northeast, which is a 50/50 JV with Artemis Resources that Novo manages.

The work brings together all previous diamond drilling, bulk sampling efforts at both Comet Well and Purdy’s Reward, detailed mapping and a 3D model that confirms the existence of significant coherent gold mineralisation over about 10km of strike.

However, the company has come to realise that the coarse gold, nuggetty nature of the gold mineralisation identified at the Karratha project presents its own set of challenges, particularly relating to obtaining a representative sample of the in-situ gold grades there.

To that end, the only real solution is significant, large-scale bulk sampling campaigns across the prospective area, which Novo management says will likely total up to 100,000 tonnes.

Only limited bulk sampling of the broader area has been undertaken thus far and the company has already discovered an extra 2km of strike of the mineralised zones since those initial bulk sample programs were conducted back in 2017-18.

The ore system is semi-continuous and in addition to the conglomerate-hosted gold, a basement gold source previously identified at East Well has recently been extended, turning up rock chip sample assays peaking at 73.9g/t gold in quartz veining.

Gold mineralisation at the Karratha project comprises coarse gold, present as “melon seed” type nuggets, together with a fine gold dusting that sits as haloes around the nuggets, which is intriguing and described by Novo as unique.

The gold itself is hosted mainly within conglomeratic rock sequences of various types, though these are predominantly related to two predictable geological horizons that the company has recognised and can be mapped accordingly.

In that sense, Novo believes that the Karratha project has the potential to be a significant new gold camp in the emerging Pilbara region.

The project development strategy closely corresponds to that that the company employed at the Beatons Creek project, about 350km to the east, which recently led to the granting of mining leases there.

Novo said that Karratha differs from Beatons Creek in the larger size of the gold nuggets detected, which will require the future development of a tailored ore grade control regime and process flowsheet that more accurately predicts the gold grade.

The company has thrown the kitchen sink at this challenge and mechanical sorting using innovative algorithms to “see” the gold content have been trialled in the past.

In effect, the process “counts” the pixels of gold mineralisation during scanning, which then acts a proxy to reconcile the gold grades from each lode to predict distribution in 3D.

Heady stuff indeed – but Novo is not shying away from novel approaches to define the gold grades at Karratha, which are somewhat ground-breaking in their own right.

From here, the company will submit a program of works for the extraction of up to 100,000 tonnes of bulk samples across the project area.

The proposed work will no doubt take a cue from results of a similar bulk sampling and mechanical sorting campaign about to kick off at Novo’s Egina project, where it plans to process several large samples of about 100 tonnes apiece, that also contain nuggetty coarse gold.

Novo CEO and Director Rob Humphyson said: “I am very pleased with the progress made to date at the Karratha gold project. To their credit, the Novo team has managed to overcome significant technical challenges presented by this unique nuggety gold system with a combination of innovative thinking and sheer hard work.”

“Novo met a similar challenge at Beatons Creek where it recently announced a sizeable gold resource. We see the path at Karratha following a similar path with a component of mechanical sorting being critical to success.”

“Working on conglomerate gold mineralisation requires an iterative approach. We think work we will be doing at Egina this year will play a part in helping us advance the Karratha gold project.”