TSX-listed conglomerate gold explorer, Novo Resources, has unearthed an Aladdin’s cave of gold nuggets in a single pathfinder trench at its exciting Egina gold project, near Port Hedland in WA’s Pilbara region. 162 gold nuggets weighing 324 grams were plucked from the trench in the first pass with most of them recovered from a swale in the underlying basement rock near the northern end. 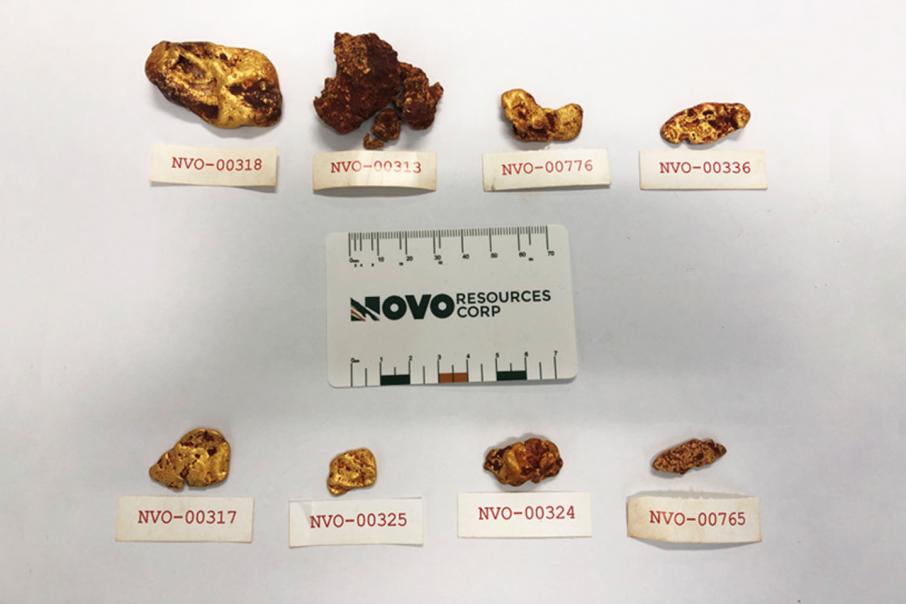 TSX-listed conglomerate gold explorer, Novo Resources, has uncovered an Aladdin’s cave of gold nuggets in a pathfinder trench at its exciting Egina gold project near Port Hedland in WA’s Pilbara region. 162 gold nuggets weighing 324 grams were plucked from the trench in the first pass.

Most of the nuggets were recovered from near the base of the gravel profile or on top of underlying bedrock near the northern end of the trench that is still prospective to the east.

Management said that whilst the nuggets were scattered throughout the entire length of the 579-metre north-south oriented trench, the majority were located within a 50 m long interval within a swale in underlying basement rock as identified by ground-penetrating radar near the northern end of the trench.

The swale is still open to the east where it appears to expand out onto the greater terrace, which the company said supports its belief that the Egina area is the edge of a more expansive gold-bearing gravel system.

Most of the nuggets have a rounded, flattened shape characteristic of gold nuggets derived from the much older bedrock conglomerate deposits found across the region with the company saying that Egina gold is derived from weathering and erosion of these conglomerates.

Additionally, Novo said the overall thin nature of sand and sheetwash cover exposed in the trench suggests that the targeted gravel horizon is likely to be present at shallow depth over a broad area across the terrace, which could keep overburden stripping to a minimum.

Novo is currently collecting a series of bulk samples from areas immediately adjacent to the exploration trench to better understand the distribution of the finer, undetectable nuggets and the fine gold in these gravels.

A heritage survey is scheduled to be carried out by the Kariyarra Aboriginal Corporation later this month to clear additional exploration areas on the Egina mining lease.

Novo President and prime mover Dr Quinton Hennigh said: “GPR coupled with exploration trenching and metal detecting is proving to be the most effective means of exploration of the gold-bearing terrace gravels at Egina.”

“Although nuggets occur along the length of the trench, we can now clearly see a connection between the slight topographic depression, or swale, and high concentration of nuggets.”

“We are hopeful the system is opening up as we step away from the hills at Egina and onto the greater terrace to the east, and we are looking forward to getting further heritage clearance to explore more of this unusual deposit.”