Novo Resources looks to be onto a new alluvial goldfield in the Pilbara after it unearthed some golden paydirt from a terrace at the “Road to Paradise” prospect, just 11km from its flagship Egina gold project. The company has also analysed a bulk gravel sample at Egina, that yielded 562.25 grams from about 414 cubic metres. Novo is one of the modern pioneers of the Pilbara alluvial gold scene, treading over new ground each exploration phase with outcomes that are wildly unknown but potentially lucrative. 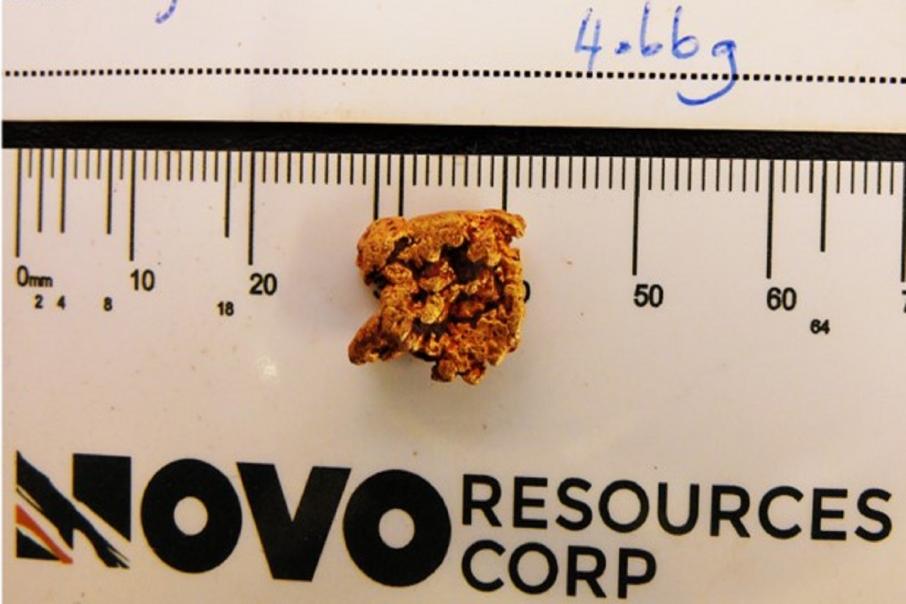 Novo Resources looks to be onto a new alluvial goldfield in the Pilbara after it unearthed some serious looking golden paydirt from a “terrace” at the “Road to Paradise” prospect, a discovery just 11km from its flagship Egina gold project. The company has also analysed a bulk gravel sample at Egina that yielded an impressive 562.25 grams from about 414 cubic metres.

Unlike conventional hard-rock gold deposits, alluvial deposit grades are commonly reported in grams per cubic metre, rather than grams per tonne. “Tonnes” measure the weight of material, whereas “cubic metres” measures the volume.

Metal detecting and gravity processing of the bulk sample recovered a quantity of coarse gold that Novo said reconciles well with smaller scale samples of the sought-after gravels.

Novo President and Chairman Dr Quinton Hennigh said: “This gives us confidence that our approach of assessing grades of gravels utilizing 4x16 metre bulk sample panels is indeed effective and appears suitable for estimating resources of this very coarse gold system, a critical step as we advance the project to trial extraction and processing”

The fine gold content of Egina’s bulk samples is still being assessed through further processing. It is possible however, that the contained gold in the samples will rise because Novo has previously been able to extract gold nuggets smaller than one millimetre through successive extractive technologies.

Nuggets, uncovered by wandering shepherds or prospectors as early as the  1850s in the region often sparked “gold fever” amongst colonists who founded towns surrounding rich alluvial diggings, many of which are still major mining centres today such as Bathurst in Victoria or Hill 50 and Coolgardie in Western Australia.

Alluvial gold deposits come from “primary” sources, where gold is freed over time by weathering or erosion and concentrated, often along the bottom of creeks or streams.

Big alluvial gold deposits are sometimes found close to their primary source and can be followed back to the in situ gold mineralisation.

Historical records for the Victorian goldfields, for example, are sketchy, however, Government geologists estimated that during the 1800s, around 1500 tonnes of alluvial gold was mined with the largest alluvial field stretching about 10 kilometres and producing more than 100 tonnes of gold.

Hill 50, now held by Ramelius, near Mt Magnet in WA, began life as an alluvial gold find in 1891 and was one of Australia’s deepest gold mines during its heyday at 1.5km deep, churning out over 2.1m ounces of gold.

Novo is one of the modern pioneers of the Pilbara alluvial and nuggetty gold scene. With no other active or known deposits for comparison, the company is treading new ground during each phase of its exploration and appraisal process and the outcomes are wildly unknown but potentially lucrative.

Novo is carefully evaluating its unique gold deposits, ensuring that when it comes to characterising the gold content and metallurgy it gets it exactly right.

Dr Hennigh said: “Late in 2019, our team set a goal of generating at least five new areas, each covering a substantial surface area, displaying similar coarse gold potential to our 2019 test area. With our third confirmed coarse gold area, Road to Paradise, we are well on our way to reaching this goal.”

“This discovery is remarkable given it was made through our regional surficial geology study followed by target refinement using GPR [ground penetrating radar].

“No gold was previously known in this area.”

“We are confident we have a successful strategy to discovering new gold-bearing gravels.”

Egina’s gold-bearing gravels are located at the surface just below a cover of sandy soil and Novo has previously flagged the potential use of rudimentary mining techniques, similar to those used by FMG to extract its surface outcropping, flat-dipping iron ore horizons in the Pilbara region of WA.

One advantage of the continuous mining method is that it is cheap – and when coupled with Novo’s innovative ore sorting technologies, it might just be possible to extract even the sub 1mm gold using “dry” and chemical free methods.