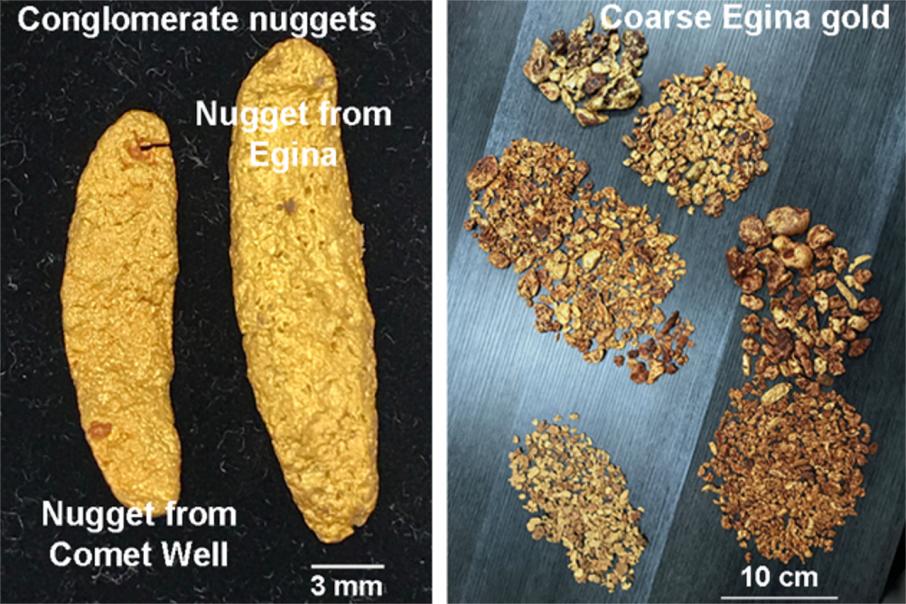 Over the coming months the conglomerate gold trailblazer plans to undertake systematic sampling in areas of previously unworked gold-bearing lag gravels within a granted mining lease at the property.

Additionally, Novo will complete a comprehensive sampling program on gravels already excavated by the previous owners which contain appreciable amounts of fine gold, based on its preliminary test work.

The company will also complete geophysical surveying, including the use of ground penetrating radar and ground magnetics to define terrace and channel boundaries at the Egina project.

Trench mapping will be carried out to assist with 3D modelling of the stratified gravel horizons and broader regional mapping will be completed to define other areas of conglomerate gold and in-situ gold potential.

“Egina is a very special gold property. Upon recognizing the potential for conglomerate gold … we … assembled a large land position covering the area. What … caught our attention was the presence of appreciable gold in the lag gravels covering the vast flat terrace system (in) the region.”

“Our research … has led to compelling evidence this gold is likely derived from basal Fortescue conglomerates like those 120km west at Karratha. This (is) particularly intriguing because it suggests there was … a potentially large source of detrital gold that has been weathered, eroded, then reconstituted into lag gravels.”

“These unconsolidated gravels are situated within a meter of surface allowing for easy exploration and assessment.”

According to Novo, Egina has the potential to host significant deposits of the sought-after gold-bearing conglomerates and weathering and erosion have made the exploration task easier by redepositing the gold into an extensive blanket of surface lag gravels at the project.

Loose gold nuggets recovered from Egina appear to be remarkably similar in shape and size to those found in-situ at the Comet Well project over 100km to the east near Karratha.

Earlier this month, Novo reported that it had finalised two acquisitions in the Egina region of WA, the first being a farm-in agreement with ASX listed Pioneer Resources over its 100%-owned Kangan gold project that consists of 4 co-joined exploration leases.

Under the agreement, Novo will earn a 70% interest in the precious metal rights on the tenements by sole funding $500,000 of exploration within 2 years to acquire its equity interest.

Late last year, Pioneer outlined some very encouraging results from the Kangan project with widespread gold anomalisms discovered within the southwest and northern part of the project tenements.

The second acquisition was a major $8m transaction for Novo where it purchased 100% of the issued and outstanding shares of Farno-McMahon Pty Ltd, an unlisted private exploration company that held four key tenements, including two granted mining leases in the Egina region.

The beauty of this deal is the gift-wrapped mining leases which should allow the company to complete its critical bulk mining activities on the lag gravels and conglomerate gold deposits.

This technical work is a fundamental step in establishing potential ore reserve estimates for Novo and by extension, a view on the economic viability of these ore streams.

The company is chomping at the bit to commence bulk sample treatment of the Egina gravels through its own alluvial plant.

The plant, purchased in 2015, can treat between 35 - 50 tonnes per hour and is largely the key to determining recoverable ore grades as the set up can salvage fine alluvial gold from bulk samples.