Novo Resources has kicked off its field exploration programs for the Egina and Karratha gold projects in the West Pilbara, WA. The company is planning to complete bulk sampling programs on defined and targeted gold-bearing gravel terraces in the Egina district, whilst regional exploration activities are underway at Karratha to evaluate conglomerate-hosted gold mineralisation between the Comet Well and the Purdy’s Reward projects. 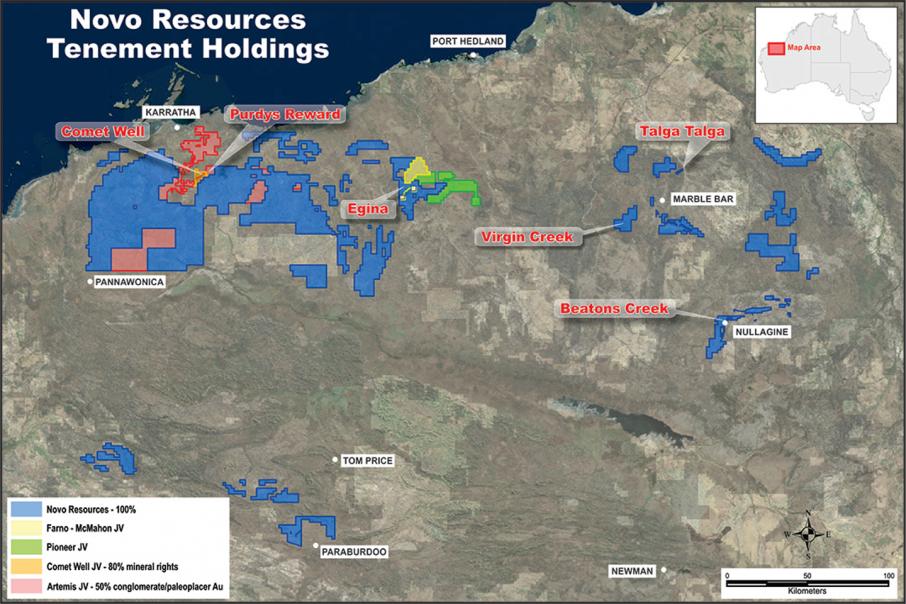 Canadian listed gold developer Novo Resources has its boots back on the ground in the West Pilbara region of WA, as it starts another field season across its extensive Egina and Karratha gold project tenement holdings.

At Egina, about 80km southwest of Port Hedland, the company is completing detailed geological mapping and small-scale, trench “pan” sampling ahead of a large bulk-sampling and processing phase for the project.

A series of upgrades to the company’s gravity gold processing plant will be completed next month, in preparation for the bulk sampling operations.

The aim of the sampling program is to establish a means of delineating mineral resources across the defined and targeted gold-bearing gravel terraces located throughout the Egina district.

To assist with the sampling work, Novo plans to undertake a ground penetrating radar survey of target areas to better assess the thickness of the terrace gravel horizons.

At the Karratha project further west, the company has begun a field program of target generation supported by mapping and sampling over 8km of prospective strike for conglomerate-hosted gold mineralisation between Comet Well and the Purdy’s Reward projects.

According to Novo management, the mineralisation report for the Karratha gold project is due early next month.

The company is also considering potential trial bulk sampling options on the existing exploration licences at Comet Well and Purdy’s Reward to assess whether an alternative processing path is available for these gold deposits, before a decision to commence conversion to mining leases.

This program aims to quickly identify, rank and test any targets outlined for occurrences of conglomerate-hosted gold so that the company can rationalise its voluminous land holdings in the Karratha region.

Earlier this month, Novo revealed that a comprehensive options study was underway for its East Pilbara gold assets located near the towns of Nullagine and Marble Bar in Western Australia.

Novo has engaged Perth-based consultants Acacia Management and Optiro to undertake the options study for its East Pilbara gold assets.

Company CEO and Director Rob Humphryson said at the time: “Concurrently with our prospects at Egina and Comet Well-Purdy’s Reward around 300-400km to the west, exploration works at our East Pilbara gold assets have continued apace and have added significant value to Novo.”

“The increase in both size and confidence of the Beatons Creek conglomerate gold resource has provided the impetus to aggressively pursue options for a standalone gold production centre in the East Pilbara.”

“Novo remains committed to our goal of rapidly developing our gold projects and we are very excited at the prospect of returning Pilbara’s gold-bearing conglomerates to production for the first time in almost 100 years”.