Novo Resources has unearthed a swag of gold nuggets from bulk sampling at its emerging Egina project located in the Pilbara region of WA. The company said that recoveries exceeded 1 gram of gold per cubic metre of lag gravels sampled and that it is investigating the use of low-cost extraction and processing of the coarse gold, using “dry” methods including continuous miners and mechanical ore sorters. 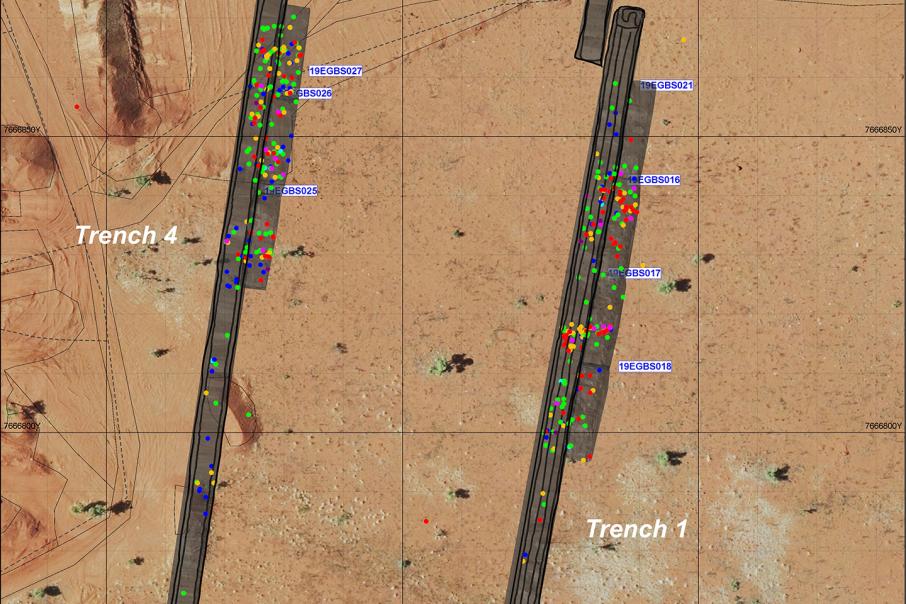 Pilbara-focussed Canadian gold developer, Novo Resources, has unearthed a swag of gold nuggets from bulk sampling at its emerging Egina project located in the Pilbara region of WA.

The company produced 337.2 grams, or 10.8 ounces of coarse gold nuggets from only 222.2 cubic metres of surface lag gravels, covering a vast erosional terrace at Egina, where Novo has barely scratched the surface to date.

The work produced a single gold nugget weighing just under 2.8 ounces, which, if excluded as an outlier, means the bulk sampling trench program generated 1.13 grams of gold nuggets per cubic metre, which is considered quite rich for an alluvial patch, according to management.

Novo now believes that Egina may well be harbouring a gold deposit of some size given the volume of the prospective gravel terraces it holds there and by extension, more than 2,000 square kilometres of the broader Pilbara region.

The encouraging results follow on from previous positive work outlined by the company in August.

Novo President and Chairman Dr Quinton Hennigh said: “We are pleased to see consistently gold-rich gravels in the swale at Egina (and) now have seven bulk samples from this target that have yielded, in aggregate, 629.6 grams of coarse, natural gold nuggets from 504.1 cubic metres of surface lag gravels.”

“Over the remainder of this year, we plan to undertake sufficient trenching to outline an area that can be subjected to test bulk extraction and processing next year.”

The company said that all gold located during the recent program exceeded 1mm in size and is potentially amenable to low-cost, “dry” extraction methods, such as eddy current separators and mechanical sorters that require no water to liberate the gold, which is quite handy in a place like the Pilbara.

In September, Novo revealed it had completed successful trials beneficiating gold nuggets from waste materials on gravels sourced from Egina using an eddy current separator, or “ECS”, in Germany.

That preliminary test work showed that the ECS could directly extract gold nuggets ranging in size from 1mm to 10mm from waste gravels in samples, without requiring water for the processing.

ECS technology is just one of several dry ore sorting and separation techniques being employed by the company to recover gold from its expansive Egina terrace gravels, which are seemingly replete with nuggets, based on the last few months of work.

ECS technology is commonly used in the recycling industry to recover selected metals based on their subtle magnetic properties.

Gold at Egina is predominantly in the form of free nuggets, which are generally coarse and exceeding 1mm in size, which presents an opportunity for Novo to explore various technologies to separate the precious yellow metal from the waste.

The company is now proposing to use a combination of mechanical sorting and ECS technology as a potentially viable method of dry processing the Egina project’s future ore stream.

The test work forms the first phase of Novo’s JV arrangement with Sumitomo Corporation, which aims to gain a solid understanding of the geology and physical characteristics of the Egina project ores.

Importantly, if ultimately successful, the proposed processing at Egina will require no water or chemicals to separate the gold and it will provide a low capital cost solution, with plant that is low maintenance, scalable and readily mobile.

The gold-bearing gravels at Egina are located at the surface just below sandy soil cover and Novo is evaluating whether or not the ore materials could be extracted using simple and cheap mining initiatives like continuous mining technology.

In May, the company entered into a USD$30m farm-in and JV agreement with Sumitomo to accelerate the development of the Egina gold project, which clearly shows that Sumitomo is invested in the emerging Pilbara gold story.

Novo said that additional trenching and bulk sampling would continue at Egina until the end of the year.