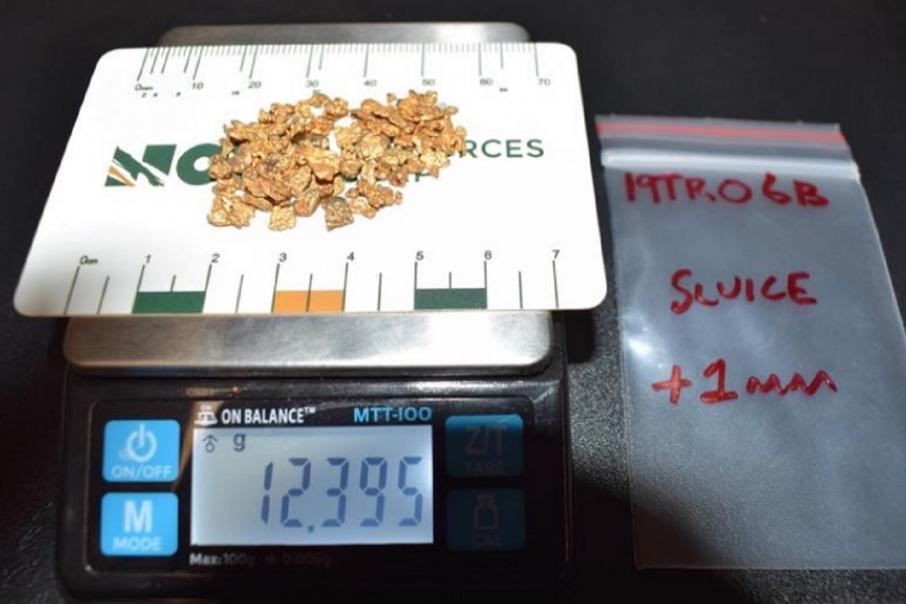 TSX-listed Novo Resources has uncovered a third, broad, shallow, alluvial gold-bearing channel at its Paradise project in the Pilbara after returning to the field recently.

Novo said the new channel, or “swale”, located 14km NNE of its Egina mining lease is at least 750m wide and open to the southwest.

In other work, assays of alluvial gravels from Novo’s nearby Egina mining lease returned a solid 0.84 grams gold per cubic metre from bulk samples that are proving better than traditional drilling in sizing up its conglomerate gold opportunity.

Returning to the field after a period of self-imposed COVID isolation, Novo said it identified the gold-bearing gravels at Paradise after processing bulk samples of approximately one tonne in volume each.  Novo used its mobile alluvial Knudson test plant for processing the dirt and gold particle counts from the processed material ranged up to 210 per tonne.

Two other gold-bearing swales were discovered earlier this year by Novo, also at the Paradise site.  Further bulk sampling is planned in coming months and Novo hopes to expand the heritage survey footprint to allow for further bulk sampling once the Kariyarra Aboriginal Group deems it safe to come out of COVID isolation.

The company said that the gold assays from two bulk samples processed earlier this year from swales within the Egina mining lease returned healthy recoveries when compared to conventional alluvial gold projects.  Novo also said the vast majority of gold recovered was in the form of coarse gold nuggets of greater than 1mm in size.

The trenches that were dug to extract the bulk gravel samples are generally between 50m and 100m in length and trench depth varies from 1m to 1.5m.  Novo said the sandy soil overburden was stripped by an excavator prior to extracting the gravels from the base of the trench and some samples were extracted from as deep as 3m.  The technical team then checks each shovel for gold nuggets before the bulk sample is taken away for processing.

X-ray fluorescence analysis of the recovered nuggets indicated purities ranging between 89 and 95%.  Densities of the gravels vary widely but generally between 1.4-2.1 tonnes per cubic metre.  Unlike hard rock gold deposits, alluvial gold bodies generally have grades recorded in grams per cubic meter rather than grams per tonne.

Once processed through the Knudson centrifugal concentrator, the concentrates are panned down to reveal the gold for point counting and further study.

Novo President and Chairman, Dr Quinton Hennigh said: “Our MAK sampling approach clearly delivers quick results showing us where gold-enriched gravels are situated, and we plan to aggressively use this technique to test a multitude of targets across the terrace this field season. As we identify these gold-bearing gravels, we plan to follow up MAK sampling with bulk sampling and processing that will allow us to assess gold grades of these gravels."

“Bulk sampling has clearly demonstrated robust grades of gravels in the swale within the 2019 test area, and we aim to similarly evaluate grades of gravels in these new areas. Also exciting are the spectacular results of our environmental rehabilitation efforts. Our in-house team has done a great job showing that we can reclaim disturbed areas to their former state, a critical step for Novo in its efforts to move Egina toward a commercial operation.”

Novo is clearly now focusing its efforts on the alluvial gravels that are shallow and quick and easy to dig and it now appears to have sorted a processing flow sheet to extract concentrations of gold that have the potential to be economic.  With longer and wider channels being discovered, Novo’s efforts look to be bearing fruit now – and it has only just started to scratch the surface.