Novo Resources has extended its tenement holdings in WA’s Pilbara region, with a binding letter of intent to secure surface gold rights over an additional 1,100 square kilometres of ground adjacent to its Egina gold project near Port Hedland. The deal is a strategic add-on for the company, which last month entered into a USD$30m farm-in and JV agreement with the Sumitomo Corporation to explore and develop Egina. 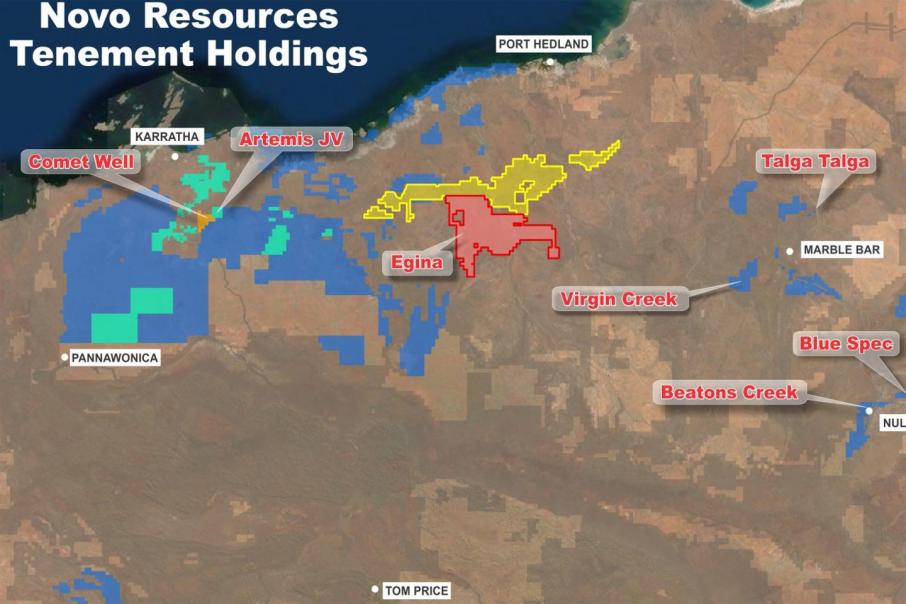 Novo Resources has entered into an option agreement for the surface gold rights on tenements adjacent to its Egina project (shown in yellow).

TSX-listed Novo Resources has extended its golden footprint in WA’s Pilbara region with a binding letter of intent to secure an additional 1,100 square kilometres of ground thought prospective for occurrences of gold-bearing lag gravels.

The newly optioned tenements lie immediately north of the company’s existing Egina gold project, which has assumed a high priority for exploration and development and hence, the new ground is a strategic add-on for Novo.

The company has secured the rights to explore for the gold-bearing gravels via an option with ASX-listed De Grey Mining for an initial three-year period.

In a tiered arrangement, Novo will pay De Grey $1 million, of which $300,000 will be held in escrow until the latter company fully acquires the assets of Chinese-owned company Indee Gold.

Indee Gold holds the prospective Pilbara gold project tenements with significant potential for primary gold mineralisation and De Grey will retain those rights, while Novo gains an interest in the surface gold rights, including the sought-after gold-bearing lag gravel horizons.

These sedimentary horizons are thought to have formed in a similar way to those at Novo’s emerging Egina project, located directly to the south near Port Hedland.

Prior to the expiry of the initial three-year period, Novo can elect to extend exploration rights for a further two years by paying De Grey an additional $1m, a 30% portion of which will be escrowed in a similar arrangement, until De Grey has fully acquired Indee Gold.

This arrangement can then be extended every two years, subject to the successful submission of a mining lease over the project area or De Grey’s waiver of this condition.

On the granting of a mining lease, Novo is deemed to have acquired an 80% interest in the relevant tenements, by giving notice to De Grey and paying the company a one-off payment of $2m.

Novo Chairman and President Dr Quinton Hennigh said: “The De Grey landholding is immediately adjacent to our Egina gold project (and) through this option arrangement, we have effectively added around 1,100 square km of additional exposure to gold-bearing lag gravels in the region, a significant focus of Novo’s current exploration program.”

“Over the coming months, we plan to evaluate the gold content and continuity of shallowly occurring gravels at Egina. Our program can now be expanded to test areas on this newly optioned ground. Although an unusual style of gold mineralisation, we are very excited by the potential the terrace gravels have to offer.”

The deal comes less than a month after the company entered into a USD$30m farm-in and JV agreement with giant diversified Japanese trading company Sumitomo Corporation to advance its exciting Egina gold project.

Via that agreement, Sumitomo can earn up to a 40% stake in Egina by spending USD$30m, or AUD$43m, over three years, with a minimum expenditure of about AUD$7m per phase of work defined by a program and budget set out by Novo.

After a recent break for the Pilbara wet season, it has been all go for Novo at Egina and the company outlined a major update for site activities at the project during May, which are now well underway.

With last week’s deal with De Grey Mining, Novo can now extend its comprehensive exploration effort into the nearby ground, with the aim of proving up a significant critical mass of surface gold mineralisation within the combined land holdings.