TSX-V listed Novo Resources has excised an additional option to take control of GBM Resources tenure on the Malmsbury goldfield in Victoria. The transaction builds on its initial ground position in the region acquired from Kalamazoo Resources last week with the company moving to control the entire highly prospective goldfield. Malmsbury lies 55km south of Kirkland Lake’s world-class 6.1 million-ounce Fosterville gold mine. 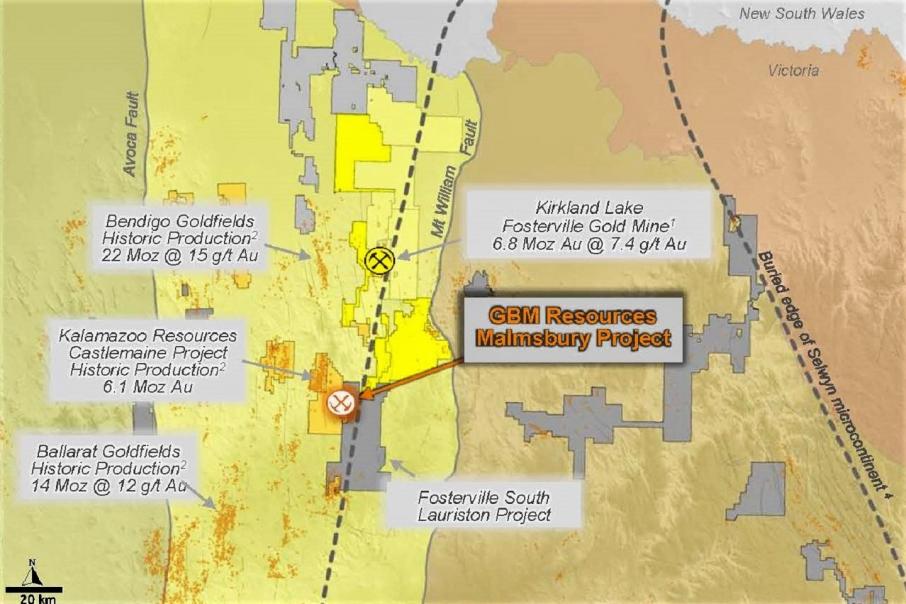 A plan showing the location of Malmsbury and previous gold production in the region. Credit: GBM Resources

TSX-V listed Novo Resources has excised another acquisition option taking control of GBM Resources’ tenure on the Malmsbury goldfield in Victoria. The transaction comes hot on the heels of another option-exercised acquisition from Kalamazoo Resources last week with Novo appearing to cement its control over the entire highly prospective goldfield.

The Malmsbury goldfield is located around 100km north-west of Melbourne in Victoria and overlies a strategic location within the world-class Bendigo Tectonic Zone. The project sits a mere 55km south of Kirkland Lake’s world-class 6.1 million-ounce Fosterville gold mine.

Novo’s wily manoeuvre will see it take a commanding position at Malmsbury, with its tenure covering over 8km strike of recognised auriferous stratigraphy. The GBM tenure is surrounded by Kalamazoo’s holding, which Novo also acquired, with the total ground position now covering more than 30 square kilometres of the gold-bearing terrane.

“Although early stage, Malmsbury hosts one of the closest geologic analogues to the high-grade Fosterville gold deposit situated approximately 50 km to the north. Like Fosterville, Malmsbury is situated along the eastern margin of the prolific Bendigo zone.”

Novo’s expanded Malmsbury project hosts a plethora of old high-grade underground workings with historical production reported at an average grade of close to an ounce per tonne and the field having officially produced more than 91,000 ounces of gold.

Notable historic workings through the field include the Queen’s Birthday, Egyptian, O’Connors, and Belltopper Tunnel mines all of which produced at over 12 g/t gold.

However, perhaps the most impressive old mine was the Panama workings that gave up close to 2,000 ounces of gold at an astonishing average grade of 87.5 g/t gold – a golden lode certainly worthy of follow up.

The company’s new tenure also hosts the established, near-surface Leven Star Reef deposit, which already weighs in at 820,000 tonnes at 3.95 g/t gold and remains open along strike and at depth – a strong position on which to build a budding inventory of gold resources.

Novo will take a 50 per cent holding in GBM Resources tenure at Malmsbury, subject to governmental approval, by issuing 1,575,387 common Novo shares in the company and by reimbursing GBM $250,000 in costs for expenditure over the project.

Once it has earned its initial 50 per cent in the project, the company can earn a further 10 per cent by forming a joint venture with GBM and committing to expend A$5 million over the tenure within a four-year period.

Upon Novo earning its 60 per cent, GBM can elect to contribute 40 per cent of all costs relating to the tenure or dilute its holding over time – GBM retains a 2.5 per cent net smelter royalty over any future production from the tenure.

Novo focus remains the development of its conglomerate gold deposits in Western Australia’s Pilbara region, however, the addition of Malmsbury to its portfolio adds a second string to its bow and, should the company’s suspicions prove correct, could propel the Novo to a new level within the realms of emerging gold producers.