Novo Resources, in conjunction with Sumitomo Corporation of Tokyo, has completed its earn-in obligations acquiring a 70 per cent interest in the precious metal rights on Essential Minerals’ Kangan project leases on the eastern side of the company’s Egina gold project tenements, in WA’s Pilbara gold region. Sumitomo joined Novo on Egina back in September 2018 via a $30m farm-in deal. 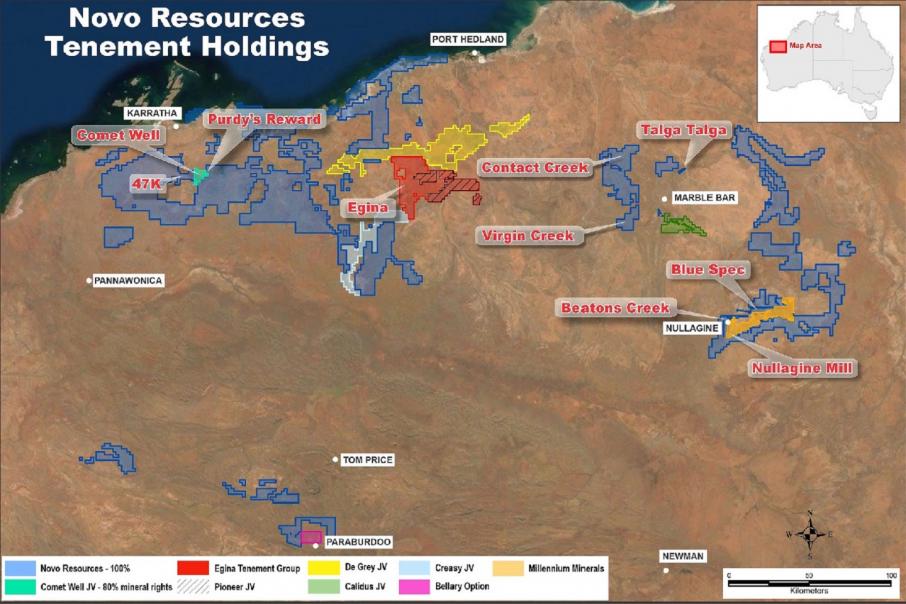 In a fit that almost matches up like the pieces of a jigsaw, the Kangan ground slots neatly into the eastern portion of the Novo’s Egina gold project tenements. Egina partner, Sumitomo, joined Novo on the gold-rich ground back in September 2018 via a $30m farm-in deal to progress the development of the project.

Novo Resources Corporation Chairman and President, Quinton Hennigh said: “We are excited to continue progressing exploration efforts and align the parties’ strategic objectives to maximize the potential of the prospective Egina project.”

“We look forward to partnering with Sumitomo and our new joint venture partner, Essential, in order to advance the Kangan project and the broader Egina project.”

Egina is a large area of alluvium-covered ground where Novo is trialling an ore sorting extraction process for the shallow gravel lag deposits containing gold nuggets which were weathered, eroded and transported from the source conglomerates in the hills to the south.

The trick for TSX-listed Novo Resources was to build an ore sorter with the technology to strip out the nuggets from the dirt and gravel to deliver what could be described as a future ‘strip mining’ operation to extract the shallow gold profitably.

Novo is already well down the path to produce a profitable flow sheet for Egina, no doubt ably supported by Simitomo’s bags of cash and technological expertise.

Interestingly, Novo has also tied up some of its Egina ground by doing a deal in the area connected with ASX-listed DeGrey Mining, whose Hemi gold deposit discovery sent the market into a frenzy earlier this year.

Novo looks set to continue to parcel up, partner up and peruse ground across the region as it beefs up its exploration and extraction efforts, The company is no doubt seeking to unlock the value of these shallow, gold-rich gravel deposits they are hoping are buried just below the surface.