Not much left in the kitty for tough times

The comfortable margin at last week’s state election would have surprised some Liberal insiders. 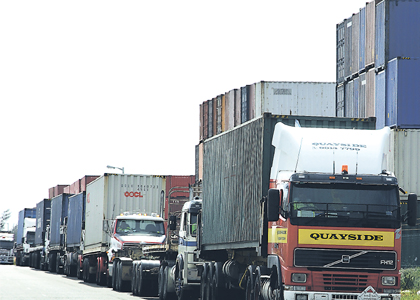 TALK, TALK: Despite it being their stated intention, the Liberals have done nothing to progress construction of port facilities in Cockburn Sound, which would ease the congestion around Fremantle. Photo: Jemma Howard

The comfortable margin at last week’s state election would have surprised some Liberal insiders.

SEVERAL Liberal politicians and party activists casually approached me during the recent election campaign to ask who I thought would win.

To each I said I expected the Barnett-Grylls minority government to be returned, but added I wouldn’t be surprised if Labor ‘just scrapes in’.

Now, the significance of that latter segment of that response isn’t that it was proved to be incorrect, but rather that each time I said it the inquirer disclosed, in one way or another, that they also felt a government loss may be on the cards.

Put otherwise, none seemed truly confident victory was in the bag, despite: Western Australia having been in a strong economic position since before 2008; that first-term WA governments are invariably returned; and that all polls showed Labor losing.

Now the election has passed it’s worth asking why there was such hesitancy, such a lack of confidence?

Why were all those I spoke with in such evident doubt?

The most likely reason is what I, and some others, call the Barnett factor.

To grasp precisely what this is, closer consideration to their leader’s past and modus operandi is needed.

This was done by moves to parachute now deputy federal Liberal leader Julie Bishop into state parliament to become leader, and hopefully premier at the 2005 election.

Ask yourself why such an incredibly complicated plot was devised to ensure Mr Barnett wouldn’t be Mr Court’s successor, and thus not lead the Liberals into the 2005 election.

Also easily forgotten is Mr Barnett’s top secret, until the very last minute, decision for a 2,000-kilometre canal to be excavated from the Kimberley to Perth to ostensibly supply Perth with potable water.

No costings, no engineering feasibility studies, no surveyed course, and no-one knew how this Barnett canal would cross rivers, gullies and cyclonic flood plains, or how vehicles, tourists and stock would cross it and the high fences on either side.

One opponent of this outrageous Barnett idea told me at the time it showed that the Liberals were being led by someone who, if he had lived in Ancient Egypt, would surely have ordered the pyramids built.

“In 1998, then under-treasurer John Langoulant complained to then premier Richard Court, that Colin Barnett had a habit of making ‘ ... expenditure proposals with no regard to the state of the overall budget and with no examination or consideration of existing budgetary capacity ..’.’’ Mr Wyatt’s release said.

And what of another concern -WA’s huge borrowings - since Mr Barnett took office?

When Mr Barnett got into Treasury’s books in 2008, state debt was $3.6 billion because of excellent stewardship by now retired former treasurer and Labor leader, Eric Ripper.

“Our net share of state debt per head has quadrupled in just four and a half years.

“Such an increase in debt levels will have occurred during the most profitable five years in WA’s history.”

What that last remark alludes to is the fact that the prudent, and sensible, thing for governments to do in booms is pay-off, not boost, debt, so when slumps come (and they’re inevitable if we look at previous booms) governments can then borrow and spend-up to help cushion the impact of recessions thereby maintaining full or near full employment.

“If it slumps, as it eventually must, the bite on budgets and our AAA rating will be merciless.”

According to Rio Tinto’s head of economics and markets, Vivek Tulpule, in a March 4 letter to the Australian Securities Exchange, the iron ore price per tonne, now around $145, will slide to $100 by September 2014.

Other experts contend $100 is far too generous.

Then there’s Mr Barnett’s inability to ‘pot black’ with any big-job creating project.

We’ve endured seemingly endless claims that the Oakajee port north of Geraldton will be built to provide an outlet for Mid West ore. However I’m finding it difficult to find anyone who believes it’s ever likely to be built.

The same applies to the much talked about James Price Point gas exportation hub near Broome.

And there’s another dead duck that, unfortunately, is too often forgotten - the Fremantle Outer Harbour, basically all of Cockburn Sound.

The sooner all heavy cargo handling is relocated to the sound the better for Fremantle residents and WA trade in general.

I recall attending a high-powered press conference six or so years ago convened by then Liberal frontbencher, Simon O’Brien, who, since 2008, has been a Barnett government minister.

He outlined how Fremantle Inner Harbour at the mouth of the Swan was too small, outdated and congested, and that the congestion was adversely impacting upon Freo’s traffic flow due to heavy haulage articulated vehicles carrying sea containers.

His message - loud and clear - was that the Fremantle Outer Harbour, under the conservatives, would proceed because it was long - meaning decades - overdue.

But what has happened during the Barnett years?

Correct me please, if I’m wrong. Nothing.

Yet that hasn’t stopped Mr Barnett outlaying hundreds of millions of dollars on digging up the CBD foreshore and historic Esplanade Park to cut off Riverside Drive, creating further city traffic gridlock.

Nor has it halted opting for a $1 billion-plus football stadium that, quite frankly, isn’t needed since that at Subiaco is quite adequate for the handful of occasions it’s used each year; all just rampant spending.

And there’s an additional $1.2 billion in outlays on election promises, which are likely to be the first to go in any book-balancing panic, because Mr Barnett isn’t too reliable when it comes to honouring promises.

Look at his failure to do anything about finally ridding WA of the clandestine nature of its lobbying sector, despite promising to outlaw it within the first 100 days of winning the 2008 election.

Perhaps knowledge of this strange record made my contacts so doubt all those sanguine poll predictions.