Northern Minerals has delivered its best-ever drilling result at the Browns Range project near Halls Creek, WA, with an exceptional 52-metre wide intercept grading 4.15% TREO recorded at the emerging Dazzler prospect. The company also discovered a new ore position just 350m to the southeast of Dazzler and will kick off further drilling in the region starting early next month. 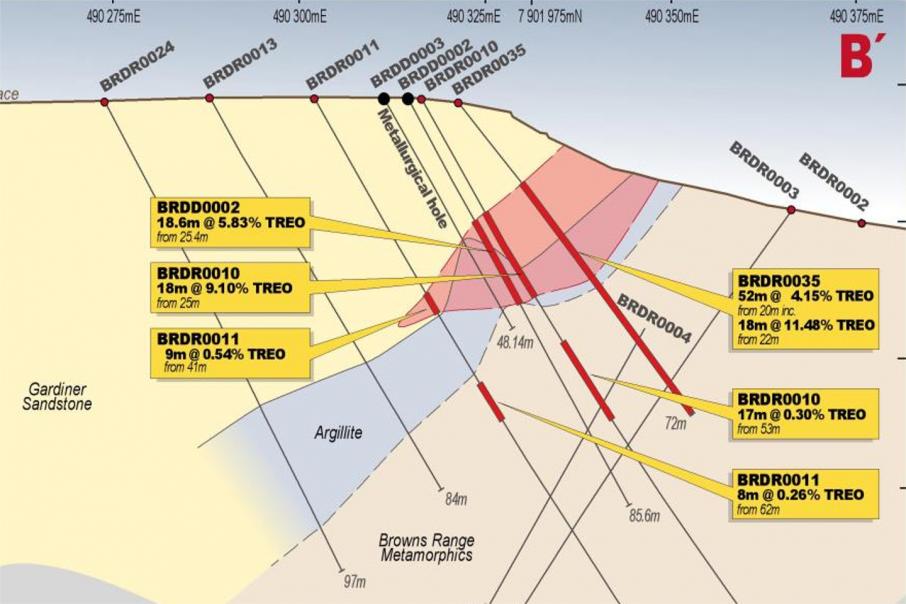 Heavy rare earths miner, Northern Minerals, has drilled its widest ore intersection to date at the emerging Dazzler prospect in the Kimberley region of WA, with 52 metres grading 4.15% total rare earth oxides, or “TREO”, from only 20m down-hole.

This hole also incorporated an astonishing 18-metre section going 11.48% TREO from 22m, a significantly higher ore grade than the mineral resource for the Browns Range project deposits located about 15km to the north.

The company first identified the Dazzler and the nearby Iceman prospects about a year ago and has since gone about defining the deposits in ever more detail, as their true potential and encouraging high-grade tenor started to crystallise.

All the while, production of heavy rare earth mineralisation has been steadily ticking away up the road at the Browns Range pilot plant project.

Northern has also uncovered hints that it has vectored into a “fertile” mineralising system after it nailed additional rare earth mineralisation in a new position about 350m along strike to the southeast of the defined Dazzler high-grade mineralisation.

These results are located between the Dazzler and Iceman prospects, with drill assays peaking at 11 metres grading 0.42% TREO from 30m down-hole.

Additional drilling is programmed to commence early next month, with 3,000m of infill and exploration work set to target the Dazzler-Iceman area and 1,500m on four other regional exploration prospects, according to the company.

Northern Minerals Managing Director George Bauk said: “We are extremely excited by these wide, high-grade results from Dazzler. The grades in some holes are up to ten times the average at Browns Range.”

“With Dazzler representing the first unconformity-hosted target that we tested, we have high hopes for the many prospects that are yet to be assessed.”

“High-grade ore feed to the plant has the potential to materially impact the economics of full-scale development, with higher production rates and lower unit costs.”

In March, the company defined its maiden mineral resource estimate for Dazzler, that came in at a very respectable 144,000 tonnes grading 2.23% TREO, which is three times the average mined grade for the Browns Range operation.

Northern believes that the high-grade mineralisation at the Dazzler and Iceman prospects are compelling targets for the company, with such satellite deposits potentially acting as significant sweeteners to the more modest grades being extracted at Browns Range.

As with Browns Range, Dazzler and Iceman contain significant quantities of the sought-after element dysprosium, which is a key material utilised in making permanent industrial magnets used in the motors of electric vehicles.

The company recently outlined its focus for the next 18 months and aims to expand its resource base with accelerated drilling programs, develop ore sorting capabilities for its present pit reserves, attain nameplate capacity of the pilot plant and complete a scoping study to investigate downstream processing to separate rare earth oxides from a mixed ore stream.

That agreement also includes an option for thyssenkrupp to participate in the potential full-scale project expansion at a later stage.

Northern appears well-placed in establishing the goal of becoming a sustainable rare earth mineral producer in WA and hence, develop into the first significant world producer of dysprosium outside of China.