Northern Minerals has returned encouraging preliminary rare earth element results from portable XRF assaying completed on infill, extension and exploratory RC drilling samples at the Dazzler and Iceman prospects near its Browns Range operation in the East Kimberley region of WA. The company said the results also outlined a new target area just to the northwest of Iceman that is anomalous in the pathfinder element yttrium. 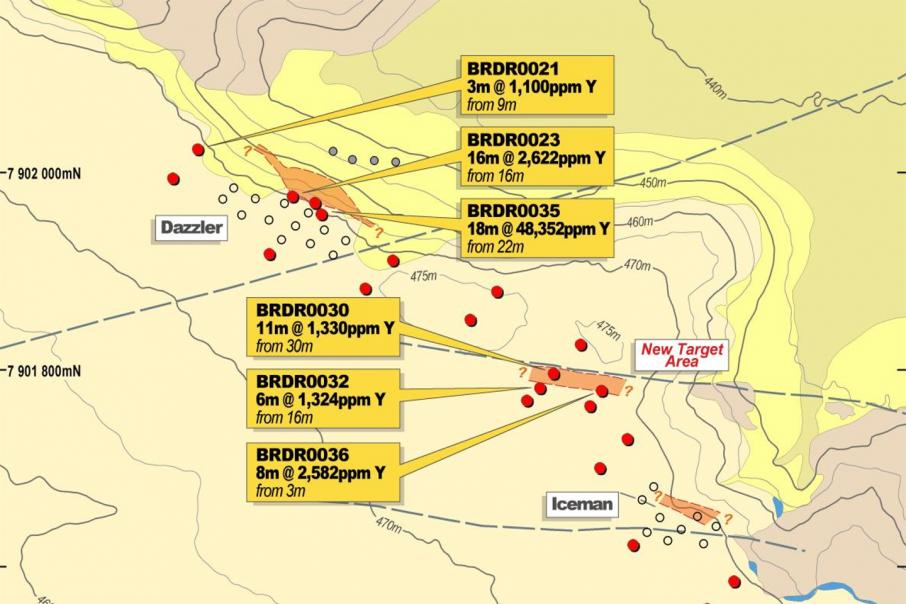 It has not taken long for rare earth producer Northern Minerals to add to its impressive results from the exciting high-grade Dazzler and Iceman prospects, with portable XRF assaying of recent RC drill samples showing up strongly anomalous rare earth mineralisation.

The company conducted an infill, extension and exploratory drilling program at the prospects, centred about 15km south of its Browns Range Pilot Plant heavy rare earth project, near Halls Creek in the East Kimberley region of WA.

The pXRF assaying turned up 38 metres grading 2.35% yttrium from 19m down-hole from infill drilling at Dazzler, which incorporated an even higher-grade section of 18m @ 4.84% yttrium from 22m.

The element yttrium has proven to be an excellent pathfinder to rare earth mineralisation at the Browns Range project according to Northern and has been used extensively and successfully in the past to pinpoint accumulations of this mineralisation.

Yttrium is considered a “light” rare earth element but is almost always found in combination with the “lanthanide elements”, including the heavy rare earths dysprosium, neodymium and europium, that the company is seeking in this region.

Importantly, new exploratory drilling also turned up anomalous yttrium mineralisation in the area to the southeast of Dazzler, which is along strike from the previously identified Iceman prospect rare earth deposit.

Another exploratory hole recorded 6m @ 0.13% yttrium from 16m down-hole, which shows that rare earth mineralisation comes close to the surface in the region.

Northern said these exploration results outlined a new target area just to the northwest of Iceman.

Management said the drilling campaign was now complete for the Dazzler and Iceman prospects and that final assay results will become available towards the end of the current quarter.

Managing Director George Bauk said: “These pXRF results continue to highlight the wide, high-grade nature of the Dazzler mineralisation. The use of pXRF as a preliminary assay tool allows us to modify and update the drilling program in real time as required.”

“As a high-grade deposit, we are highly motivated to increase the size of mineral resources in this area as a source of ore for many years to come.”

The Dazzler deposit holds an inferred mineral resource estimate of 144,000 tonnes grading 2.23% total rare earth oxide, which is a considerably higher overall grade than the Browns Range mineralisation currently being mined and processed.

Also this week, the company announced it had appointed Ms Xianhua Liu to the Board as a Non-Executive Director, effective immediately.

Ms Liu is an investment banker with experience in corporate advisory and the equity markets, predominantly in China.

Northern Minerals Chairman, Colin McCavana said: “We welcome Ms Liu to the Board of Northern Minerals as we ramp up our efforts to be a significant and meaningful supplier of heavy rare earths to support the burgeoning electric vehicle sector.”