Northern Star's Beament rises to top of 40under40 (video added) 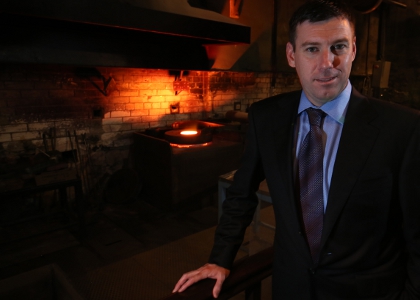 Mr Beament has overseen the rapid rise of Northern Star from greenfields explorer in 2007, to where it is today, one of Australia’s up-and-coming gold producers, valued in excess of $400 million.

He also steered the Northern Star ship through the global financial crisis, winding back the company’s operations in an uncertain environment three months before the downturn hit.

At the time, however, Northern Star’s stock was trading around 1 cent.

The subsequent purchase of the Paulsens gold mine for $40 million was the catalyst for the company’s rapid ascension to market darling status.

The rest, as they say, is history, with Paulsens now producing more than 100,000 ounces of gold per year, and the company eyeing another 100,000 ounce per year mine at the nearby Ashburton operation.

Northern Star shares are currently trading around 98 cents, having reached an all-time high of $1.56 in November last year.

He joins an exclusive list of 40under40 winners, including leading WA business identities Mark Barnaba, Michael Malone and David Flanagan.

A full report on all the winners is in this week’s print edition of WA Business News.