Northern Minerals has passed another significant milestone after producing more than 210,000 kilograms of heavy rare earth carbonate concentrate for sale to end-users. A 40,406kg shipment of concentrate from Northern’s Browns Range rare earths pilot plant is due to be dispatched to its European offtake partner within days. The shipment will contain dysprosium, terbium and yttrium. 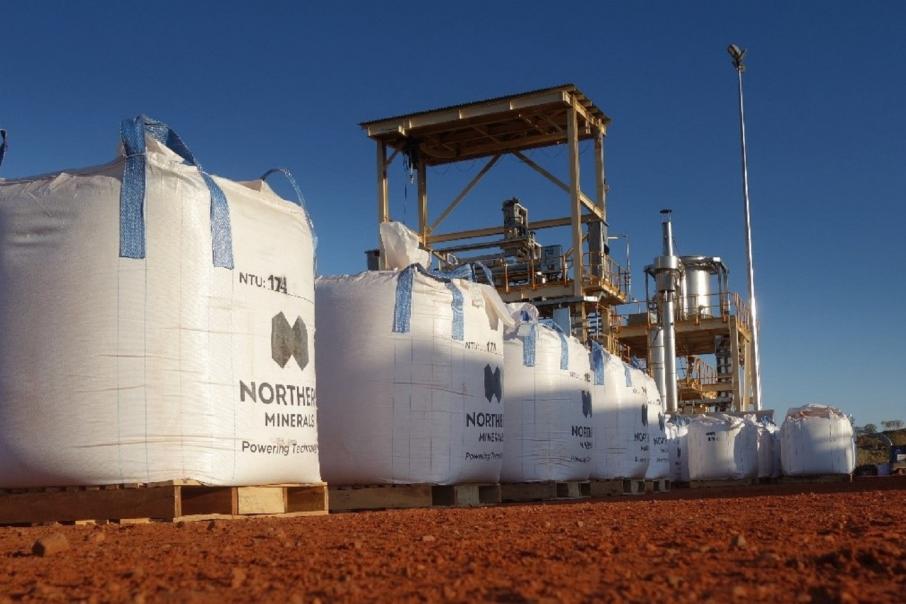 Northern Minerals has passed another significant milestone after producing more than 210,000 kilograms of heavy rare earth carbonate concentrate for sale to end-users. A 40,406kg shipment of concentrate from Northern’s Browns Range rare earths pilot plant is due to be dispatched to its European offtake partner within days. The shipment will contain dysprosium, terbium and yttrium.

The development program has resulted in the optimisation of the current processing circuit, with the operation now producing concentrate to feed an increasingly ravenous market for Northern Minerals heavy rare earth elements that are mostly only available from Chinese producers.

The shipment to Thyssenkrupp comes at a pivotal time for the rare earths market, with a raft of specialty metals having been declared both critical and strategic elements by many countries.

Pricing for heavy rare earths elements has jumped markedly in recent months too, due to increasing demand and a growing gap in the supply and demand curve.

Northern Minerals Chief Executive Officer, Mark Tory said:“Despite the operational and supply chain challenges in the past 12 months, the global trend toward electrification of transport continues to accelerate as a result of regulatory changes and bold decisions by car manufacturers on transition to fully-electric fleets.”

“Browns Range is still the most strategically placed heavy rare earths operation in the western world, and we continue to apply our significant R&D learnings to successfully produce batches of REC for our European offtake partner thyssenkrupp from our Pilot Plant in the Kimberley region of WA.”

Northern Minerals is the first significant producer of heavy rare earths outside of China, positioning it as a company with both strategic and commercial importance. Interestingly, China uses around 70 per cent of all heavy rare earths it produces, leaving the rest of the world to scramble for the remaining production, a scenario that has led to an ever-tightening export market and a rapid strangulation of supply.

Heavy rare earth elements have various uses, however, at present the most important is their use in electric motors where they are used to stabilise magnets, preventing them from degradation at high-temperatures, thereby extending the life of the drive train.

With both commuter and commercial transportation currently undergoing rapid “electrification”, the demand for heavy rare earths and particularly dysprosium is growing at a rapid rate, with the tightly controlled metals price seemingly keeping up with demand.

Research by specialty REE commentator, Asian Metal’s indicates that pricing for several heavy rare earth elements has taken off in recent months after years of stable pricing. Dysprosium in particular has leapt in value since the start of the year, rising more than 50 per cent and now fetching over US$460 a kilogram.

The outlook is similar too for Northern Minerals other key export, Terbium, with that metal having risen nearly 40 per cent recently to trade at an impressive US$1,526 a kilogram, all of which somewhat vindicates Northern Minerals counter-cyclical development of Browns Range.

The company’s current 40 tonne carbonate shipment is reported to contain 1,835kg of dysprosium and 233kg of terbium, with Northern Minerals now looking towards a healthy windfall in the coming weeks.

The Browns Range heavy rare earths project is located 160km to the south-east of Halls Creek within Western Australia’s Kimberley region, straddling the border with the Northern Territory. The company’s tenure covers more than 2,750 square kilometres of the mineral-rich terrane, with Northern already speaking for some seven separate deposits in close proximity to its pilot plant operation, including the significant Wolverine, Gambit, Cyclops and Banshee discoveries.

Management says it is now in the closing phase of its stage 1 development and will soon look to make a decision on a move to a full-scale plant and production, which is likely to come in the months ahead on the back of increasing demand and surging prices.

With Northern Minerals rapidly shaping up as one of the only providers of dysprosium outside of China and the automotive industry clamouring for product as the move to electrification builds towards 2030, the company looks to be showing near perfect timing as its Browns Range plant continues to push out product and the remainder of the rare earths puzzle begins to fall into place for the budding producer.