New owner has brought a touch of high-tech to the West Perth eatery, as Adam Orlando reports. 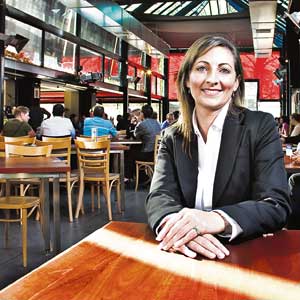 WHEN former Londoner Brent Pollard bought Black Tom's from Warren Mead, he took a different approach to the business than his predecessor.

"I didn't want to shout from the hilltops; people recognised that we reopened, so we left it at that," Mr Pollard told Gusto.

He relaunched the West Perth-based restaurant almost four months ago, after buying it and restaurant Mead's on Mosman Bay from receivers.

Mead's on Mosman Bay will be relaunched at the end of the year as Mosmans.

While Mr Mead was a very public face of his empire, Mr Pollard likes to operate behind the scenes and let the food and service speak for itself.

It's the first time Mr Pollard has owned a restaurant, although he has owned and operated hotels throughout the UK for many years, and he concedes that he is still learning the game.

"We made some mistakes early, like with our menu and the way we delivered it, but with people like [venue manager] Letizia Cockburn now on board, we're getting that right most of the time now," Mr Pollard says.

Black Tom's is situated in the heart of the West Perth business community, with many of the restaurant's clientele from surrounding offices.

Following extensive renovations, modelled on a London concept of networking bars for city workers, Black Tom's is marketing the theme of being "well connected".

The restaurant is thought to be one of the first in Western Australia to host a Wi-Fi connection for customers, high-speed wireless broadband internet access supported by most personal computer operating systems, game consoles, laptops, smartphones, printers, and other peripherals.

"I don't think there are many restaurants in Perth to have Wi-Fi; we want people to come in for breakfast or a coffee and sit down with their laptop and get on with their work and even have a meeting here," Mr Pollard says. "I want people to think of here as an extension of their office."

Mr Pollard says while large functions are the lifeblood of any restaurant, Black Tom's is a product of its environment, and so is being marketed to take advantage of that.

"We're right in the heart of the business community in West Perth and it's the perfect hub then to cater for a lot of different businesspeople, which is the main thing," he says.

"I also think there's more of an opportunity here; our core customers are from the mining industry, which is the biggest industry around here, but we wanted to broaden the appeal of the restaurant because there are a lot of creative industries around here too, in West Perth and in Subiaco.

"We like our mining customers and want them to keep coming back because they're great customers, but I think there are many other sectors that work close to here and in the past they probably haven't thought of Black Tom's, and we're trying to engage with them.

"So by making it fresher and cleaner were hoping to appeal to the other sectors around here too.''