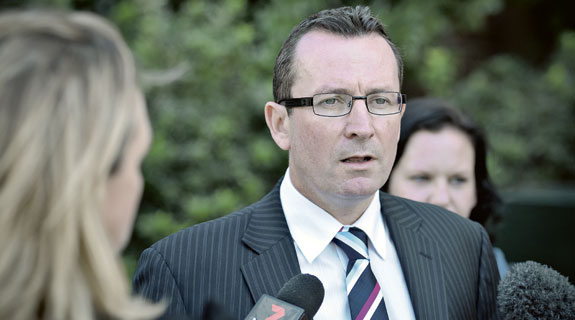 Mr McGowan said the reforms were designed to introduce “common sense” into liquor licensing, making it easier for new small bars, restaurants and tourism-related venues to win the right to serve alcohol.

The proposed changes include allowing for tourism, community and cultural benefits to be considered in licensing applications, as well as giving equal weight to tourism bodies as compared WA Police and the Department of Health.

The opposition leader said it should also be easier for venues that showcase local musicians and performers to obtain a liquor licence.

He also called on Pollice Commissioner Karl O'Callaghan and executive director of public health Tarun Wareemanthri to stop the policy of automatically objecting to new licence applications, and to only object when a venue poses a realistic health or public order risk.

That particular aspect of liquor licensing has been a long-running issue for Perth hospitality operators, which have long argued that the 'knee-jerk' policy, among other failings of the current system, has stifled development of the industry.

Mr McGowan said changes to the Liquor Act would be vital to create more jobs in the sector and enhance Western Australia’s tourism offerings.

“It’s ridiculous that businesses which want to provide a sophisticated experience for locals and tourists – such as the State Theatre and the luxury Treasury Hotel – were knocked back,” the opposition leader said.

“These venues would hardly bustle with people looking for a fight, yet their licence applications were rejected on the dubious assertion that they would ‘create alcohol-related violence or crime’.”

Australian Hotels Association WA chief executive Bradley Woods said the policy was a response to an “abuse of power” by law enforcement and public health agencies, which had been acting as a barrier to tourism development through ongoing objections.

“WA Labor’s proposal to recognise the tourism, cultural and artistic value of venues is a step in the right direction in supporting hospitality and job creation.

“It shouldn’t, however, be limited to small bars and restaurants and should include equal consideration of iconic hotels, pubs and taverns.”