Neometals has wrapped up a review of historical data for its 11 nickel sulphide deposits forming the Mt Edwards resource base near Kambalda in Western Australia, bumping up the total resources to a hefty 162,560 contained nickel tonnes grading at an average 1.6 per cent. Neometals plans to demerge Mt Edwards into a new ASX-listed company and focus on its core battery recycling and vanadium extraction businesses. 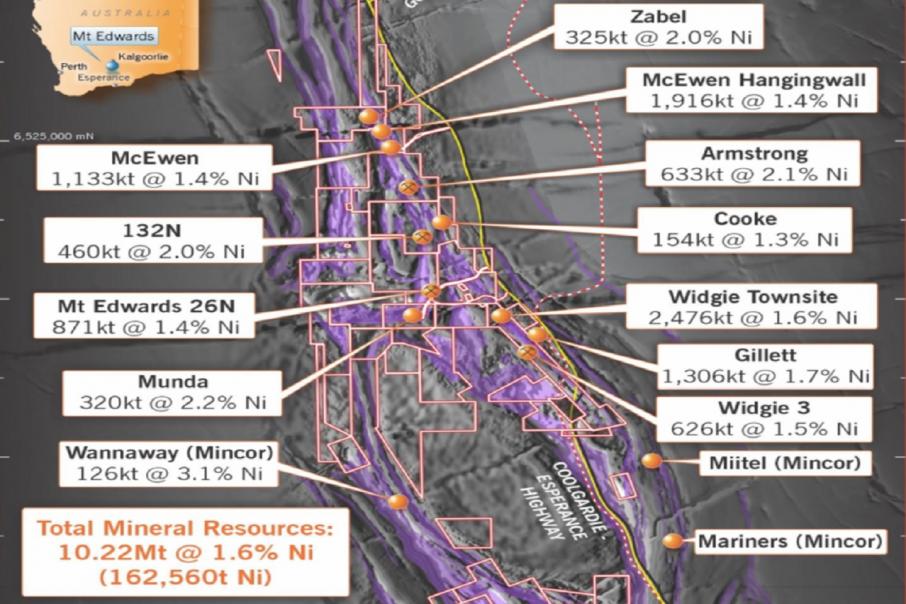 Neometals has wrapped up a review of historical data for 11 nickel sulphide deposits making up its Mt Edwards project resource base near Kambalda in Western Australia ahead of its planned demerging of the project into a new ASX company, Widgie Nickel. Total resources are now estimated to contain a hefty 162,560 tonnes of nickel grading an average 1.6 per cent.

The planned Widgie Nickel demerger will allow Neometals to focus on its core battery recycling and vanadium extraction businesses.

Total resources at Mt Edwards are now reported as 10.22 million tonnes at 1.6 per cent nickel in the inferred and indicated categories.

Neometals has recently been reporting resource updates for the 11 deposits including an eye-catching 51 per cent hike at the Mt Edwards 26N resource and another 45 per cent lift in the combined McEwen and McEwen Hangingwall resources.

McEwen and McEwen Hangingwall now total 3.049Mt at 1.4 per cent nickel for 41,500 contained tonnes of nickel, up from 28,220 tonnes previously reported.

The 100 per cent owned Mt Edwards tenure covers more than 300 square kilometres and takes in some 50km of strike over and around the renowned Widgiemooltha Dome structure that has hosted several historical nickel mines.

Widgie Nickel, projected to list on the ASX in the fourth quarter this year, will look to advance the existing nickel resources and capitalise on further exploration potential at the tenure.

Once the demerger is complete Widgie shareholders will be eligible to participate in an entitlement offer for additional shares in the company.

Management says the move will benefit shareholders by providing a dedicated nickel-focused entity to progress Mt Edwards whilst Neometals is left to focus on the lithium-ion battery industry.

Through the Primobius project, an equal joint venture with leading German supplier of metallurgical equipment and services, SMS Group, Neometals has commissioned a showcase demonstration plant in Germany to recover valuable materials such as cobalt and lithium from end-of-life batteries.

A feasibility study and final investment decision on the venture is on target for next year.

Neometals also has the right to enter a 50-50 joint venture with Scandinavian resources company, Critical Metals, to develop a vanadium recovery project in Finland.

The duo is assessing the viability of building a facility to process and recover high-grade vanadium chemicals from a steel making by-product generated by the Scandinavian steel maker group, SSAB.

A pre-feasibility study on the operation has projected total free cash flow before tax of $US764 million across an estimated plant operating life of 10.5 years.

Construction of a pilot plant has commenced.