Neometals continues to confirm the high-grade tenor of its Mt Edwards nickel sulphide project in WA’s Goldfields on the back of some encouraging diamond drilling assay results from its recently acquired Munda deposit, where one hole returned 8.3 metres at 2.16% nickel from 93m down-hole, including an impressive 2.3m @ 6.11% nickel from 99m at the base of the ultramafic unit. 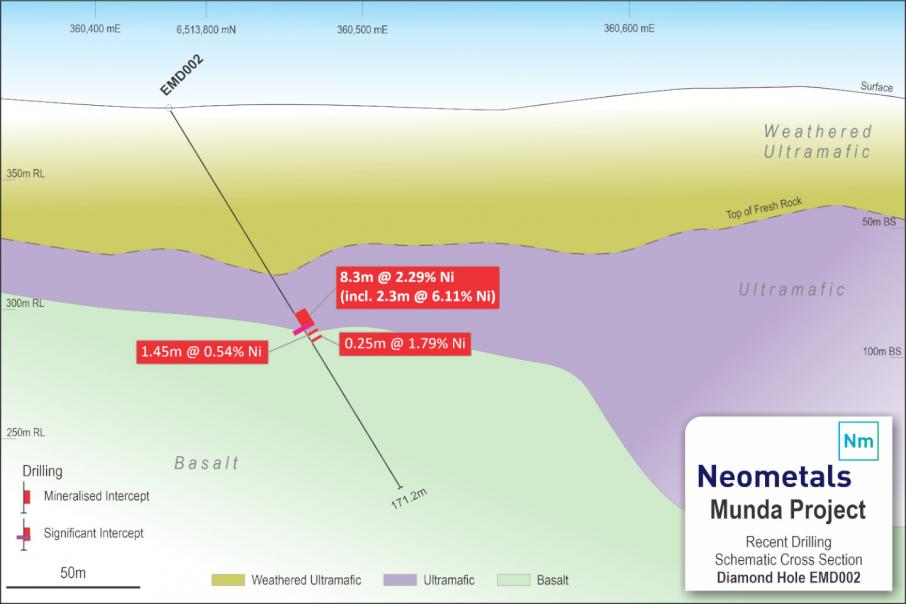 Diversified explorer and mineral developer, Neometals, continues to confirm the high-grade tenor of its Mt Edwards nickel sulphide project in WA’s Goldfields on the back of some encouraging diamond drilling assay results from its recently acquired Munda deposit near Kambalda.

The ASX-listed company is encouraged by one hole that returned an impressive 8.3 metres at 2.16% nickel from 93m down-hole, including 2.3m grading a cracking 6.11% nickel from 99m at the base of the ultramafic unit.

Adding to the intrigue, another nearby hole intersected 3m at 0.58% nickel and 396ppm copper from 124m down-hole.

Both holes intersected disseminated nickel sulphide mineralisation, with the first hole also passing through zones of semi-massive and stringer sulphides.

Located within the nickel-rich Widgiemooltha region, Munda sits to the south of the historical “26N” Mt Edwards underground nickel mine, which produced 951,568 tonnes at 2.7% nickel for 25,633 tonnes of nickel metal between 1980 and 1996.

Earlier this year Neometals increased its total nickel mineral resources at Mt Edwards to 74 million tonnes grading 1.7% nickel for 123,340 tonnes of contained nickel, representing an increase of around 155% of contained metal after four additional deposits – Mt Edwards, Widgie Townsite, Widgie 3 and Gillet – were added to the inventory.

Munda’s nickel sulphides are hosted in ultramafic rocks and display classic, Kambalda-style rock textures that are consistent with nearby high-grade nickel deposits and mines.

According to Neometals, the fact that the nickel sulphide intersections occur at the basal contact of the ultramafic rock sequence, is considered encouraging as that contact is the host to most of the economic nickel sulphide deposits in the Kambalda-Widgiemooltha district.

The company will now accelerate its efforts at Munda with a view to establishing a mineral resource at the project.

Neometals has also just completed a drill program at the Widgie 3 and Gillet prospects that were designed to target further nickel sulphides adjacent to existing mineral resources.

The company acquired the nickel mining rights for the Munda mining lease from WA Nickel, a wholly-owned subsidiary of Estrella, in early September for just $250,000.