Neometals has added some serious length and width to its Widgie South nickel trend at the Mt Edwards project near Widgemooltha, in the first serious drill campaign to hit the area since 2008. Best intercepts include 16 metres grading 1.45% nickel and 21 metres grading 1.05% nickel. Narrow high-grade nickel zones in the broader intercepts ran up to 4.79% over two metres and 2.42% over four metres. 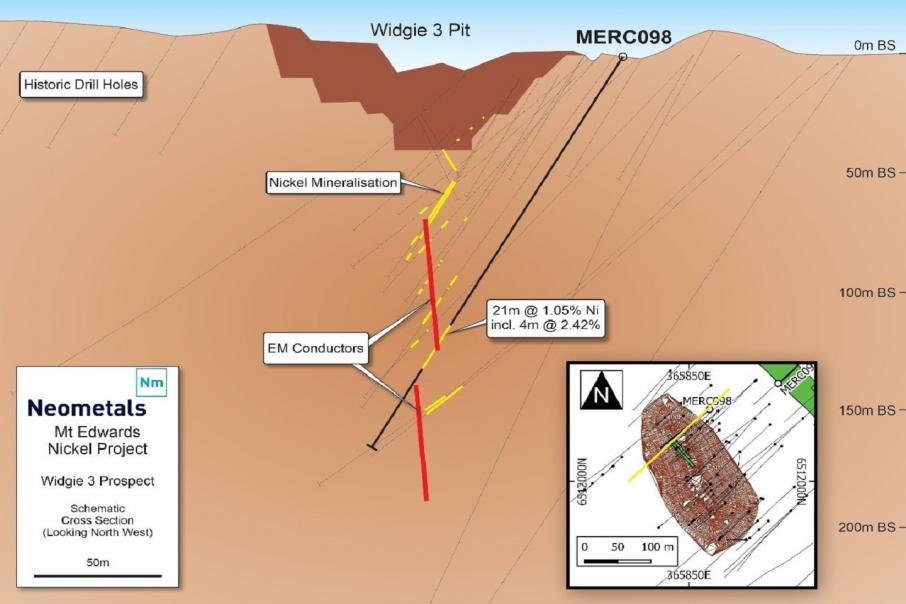 Neometals has added some serious length and width to its Widgie South nickel trend at the Mt Edwards project near Widgemooltha, in the first serious nickel drill campaign to hit the area since 2008. Best intercepts include 16 metres grading 1.45% nickel and 21 metres grading 1.05% nickel. Narrow high-grade nickel zones in the broader intercepts ran up to 4.79% over two metres and 2.42% over four metres.

The campaign across the emerging Widgie South trend covered the Widgie 3 and Gillett deposits and the Widgie 3 North, Rhona and Widgie 3 South prospects.

The new results have boosted the strike length at the Gillet deposit by around 50%, the company said.

The 4km-long Widgie South trend is already host to nearly 67,000 tonnes of ore grading 1.8% nickel across the Widgie Townsite, Gillet and Widgie 3 deposits.

Neometals’ Mt Edwards nickel project that envelopes the Widgie South trend, is located over a total strike length of 50 kilometres across the Widgiemooltha Dome. The Perth based ASX-listed company is targeting distinct, high-grade zones in what is an undeniably world-class nickel district.

In addition to its latest drill campaign at Mt Edwards, Neometals has also been running a series of downhole EM surveys, or “DHEM”.

DHEM is the nickel explorer’s tool of choice as they have the capability of detecting massive sulphide mineralisation proximal to drill holes.

It appears that Neometal’s DHEM surveys are lining up nicely with the occurrence of massive sulphides across the Widgie South trend and a number of additional “strong targets” have been identified that are still to be drill tested, according to management.

The company is also “opening up” about 4000m of old drill holes, in order to run a DHEM tool down them, with a view to locating nickel conductors that may be lying dormant nearby.

Its is also using an aircore rig on the western side of the Widgiemooltha Dome across its Baldrick, Percy and Double Eagle prospects. These prospects were identified as part of a regional wider soil sampling program. In addition, the company has re-modelled an old EM survey and found that some of these geochemical anomalies had coincident EM conductors, which shows that they are likely on the right track.

Neometals’ western prospects are located south of Mincor’s historical Wannaway mine. Wannaway was mined over a couple of campaigns between 1984 and 2008 for 553,000 tonnes at 2.3% nickel and 524,000 tonnes at 3% nickel respectively.

This isn’t Neometals first rodeo either with the ASX-listed company shooting to stardom as a small-cap when it sniffed out and developed the massive Mt Marion lithium mine in the broader region some years ago.

With nickel hotting up rapidly as a vital commodity in the electric vehicle, lithium battery markets, Mt Edwards is firming in focus now for Neometals who has been there and done it before.