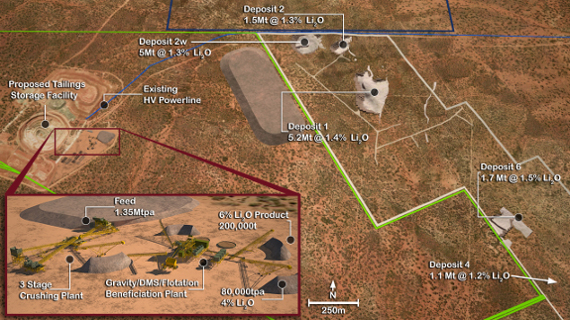 Cashed up Perth based Lithium heavyweight, Neometals, is hoping to lock away a sizeable part of its 15-25m tonne exploration target with a substantial $3m drilling campaign at the Mt Marion Lithium project south of Kalgoorlie.

The company, which holds 45% of the Mt Marion project along with its partners, Mineral Resources (30%) and Jiangxi Ganfeng Lithium Co., Ltd (25%) have kicked off a sizeable drilling campaign that will see up to 335 RC holes and 30 diamond drill holes undertaken at the project.

The purpose of the drilling campaign is two fold. Firstly the company is looking to increase the open pitable mine life at Mt Marion through the infill drilling and extension of existing deposits.

Secondly, they are seeking to define new resources from outcropping pegmatite prospects on lithium rights acquired from Metals X Ltd in July 2015.

The Mt Marion project currently boasts a mineral resource of 23m tonnes of ore grading 1.39% Lithium Oxide and 1.43% iron oxide. Once in production, the project is expected to produce over 200 000 tonnes of Lithium concentrate per annum.

Independent consulting group Snowden Mining Industry Consultants have estimated the current exploration target at Mt Marion to be 15 – 25 million tonnes at a grade of 1.1-1.4% Lithium Oxide.

Neometals, who are led by the wily David Reed and son Chris, recently became the envy of many other junior’s after pulling together an exquisite partnership with groups that will both fund the project development and commit to 100% of the off-take.

China’s second largest lithium producer, Jiangxi Ganfeng Lithium Co., Ltd (“Ganfeng”) paid Neometals nearly USD$20m last quarter for a 25% share of the project and they have also committed to a take or pay off take agreement that will see Ganfeng purchase 100% of the project’s Lithium concentrate at market prices.

The project equity investment by Ganfeng took Neometals cash at bank at the end of last quarter to a notable AUD$34m.

Chris Ellison’s Mineral Resources have taken on 30% of the Mt Marion project and will fund it into development. Construction has now commenced at the project with first production expected in the 3rd quarter of the 2016 calendar year.

With the worldwide Lithium Ion battery market burgeoning on the back of the mobile phone market, Neometals looks well placed to realize substantial value from this project – and quickly.