Neometals has lifted the nickel resource at its Mt Edwards nickel project in WA yet again after expanding the resource at its Gillett deposit by a sizeable 30 per cent. Gillett now stands at 22,500 tonnes of contained nickel that sits between 80m and 350m below surface. Gillett is one of eleven ‘short lead time’ deposits that Neometals is building. 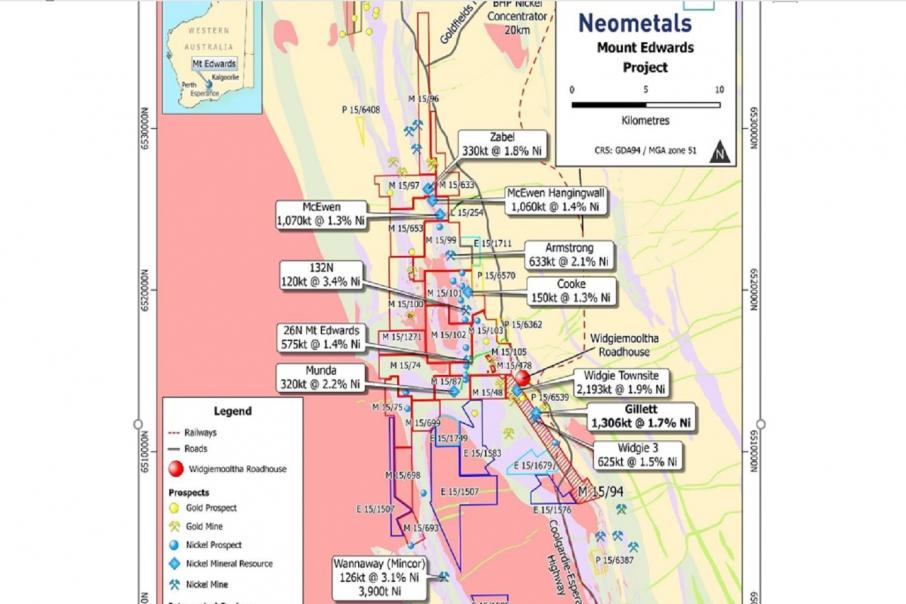 Neometals has lifted the nickel resource at its Mt Edwards nickel project yet again after expanding the mineral resource of the Gillett deposit by a sizeable 30 per cent.  Gillett now stands at 22,500 tonnes of contained nickel sitting between 80m and 350m below surface grading a solid 1.7 per cent nickel.

It is just one of a cluster of ‘short lead time’ deposits that Neometals is developing in the historical nickel mining region 90km south of Kalgoorlie.  The impressive upgrade at Gillett adds to Neometals’ pot of eleven individual deposits that roll up to give the Mt Edwards project a global resource of 8.38Mt at 1.7 per cent nickel for 141,000 tonnes of contained nickel.

Neometals is looking to build a pipeline of resources that have short lead times to production in the region that is littered with historical nickel sulphide mines.  The company is following the successful strategy of other small-cap miners by revisiting old workings and dredging historical records to identify new deposits where mineralisation is known to occur.

The company’s technical team has scoured the archives and integrated a number of historical assay records with its own, new RC drill results to increase the Gillett resource from 17,050t to 22,500t of contained nickel.

The new drill results at Gillett come from a campaign that was completed back in September 2019. One of the best intercepts during that campaign was a healthy 16m at 1.44 per cent nickel from 222m downhole.

Neometals said the new drill results point to a much larger mineralised footprint that has been missed due to a lack of exploration in the area since 2008.

The Christopher Reed-led nickel explorer looks set to continue its efforts to take Gillett from an inferred resource to an indicated or measured resource with further RC and diamond drilling along the deposit’s 800m strike.

Importantly, the Gillett deposit is still open to the north and south which means further resource additions are likely.

Nickel is very much a part of the battery metals story and whilst there are plenty of peaks and troughs in the nickel price, the long-term outlook for it as a battery metal should see demand remaining strong.

Having created the Mt Marion lithium mine in the same region, Neometals knows a thing or two about battery metals and its nickel hunt is entirely consistent with it ongoing interest in battery metals.