Negatives piling up for Gillard’s Labor

Julia Gillard may be busy running the country, dealing with ministerial resignations and the ongoing fallout from the Craig Thompson scandal, but speculation about what she knew of the Bruce Wilson/AWU ‘slush fund’ won’t go away. 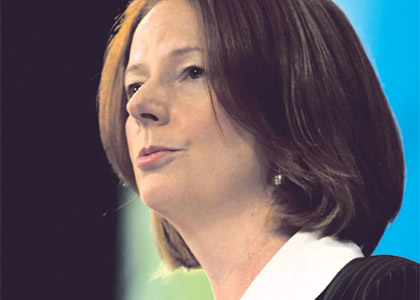 STILL IN IT: For some, the prime minister hasn’t cleared the air over the AWU affair of 20 years ago. Photo: Grant Currall

Julia Gillard may be busy running the country, dealing with ministerial resignations and the ongoing fallout from the Craig Thompson scandal, but speculation about what she knew of the Bruce Wilson/AWU ‘slush fund’ won’t go away.

MY three favourite politically focused quotes came from a US president, a US general, and a former Georgian bank robber who became the Soviet Union’s paramount leader.

They are: “The buck stops here” (President Harry S Truman); “I shall return” (General Douglas Mac Arthur); and “One death is a tragedy, a million is a statistic” (Josef Stalin).

Each encapsulates our understanding of each of these men.

Truman was someone who believed in accepting personal responsibility, instead of long-winded denials and excuses, making him unlike so many politicians before, and, unfortunately, since.

MacArthur, a soldier/a manager of violence, never countenanced defeat, until, of course, President Truman relieved him of his command during the Korean War. And while there is some doubt about the authenticity of the Stalin quote, this sentiment is precisely what you’d expect from a hardened criminal who rose to lead the Bolshevik Party, enabling him to become a genocidal killer of innocent men, women, and children.

While pondering their lines I wondered if perhaps an Australian public figure, past or present, had matched them.

I began with our inaugural prime minister, Edmund Barton, but couldn’t recall anything memorable he’d ever said.

I then moved up the prime ministerial ladder towards Julia Gillard.

The only inspiring prime ministerial line that came to mind before reaching Ms Gillard was Labor PM Andrew Fisher’s 1914 pledge of loyalty to Great Britain in her titanic struggle with Germany and the Austro-Hungarian Empire that Australia would stand firm “to the last man and the last shilling”.

However, before reaching The Lodge’s current occupant, Ned Kelly’s nearly 150-year-old three worder - ‘Such is life’ - came to mind, although it’s claimed he in fact said something quite different as he approached the gallows on November 11 1880: “Ah well, I suppose it has come to this”.

But back to Ms Gillard, who is author of three memorable ones likely to stand the test of time and be requoted whenever conversations turn to her.

Another memorable one is: “It was a slush fund”, uttered while explaining to Slater & Gordon partners why she’d created an association they knew nothing about.

They immediately interviewed her after learning she’d failed to open a file at Slater & Gordon, which represented Mr Wilson’s union.

Unfortunately for Ms Gillard, word of that slush fund leaked, leading to her being named in Victoria’s parliament.

But her third one liner is likely to be even more memorable: “There will be no carbon tax under the government I lead.”

For me, the three quotes together encapsulate the essence of ‘Gillardism’; her two-decade-long struggle with a crucial remnant of a romance, and promising voters one thing but doing another, with no sign of regret.

I focus on them primarily because pundits may have forgotten that Victorian Police are presently investigating the Wilson-AWU affair in which Ms Gillard was so pivotal, just as they’ve investigated the activities of onetime Hospital Services Union official and now federal MP, Craig Thompson.

A key player in the resurfacing of both affairs is Michael Smith, an investigative Sydney-based journalist and former host on Fairfax-owned 2UE radio.

But just as a pre-recorded interview with a former AWU official who’d agreed to tell-all about the Wilson-AWU affair was to go to air, 2UE manager Graham Mott pulled it from broadcast, even though Mr Smith claims to have cleared it with one of Australia’s leading libel lawyers.

Coincidentally, The Australian, a News Ltd newspaper, had just reported on the Wilson-AWU affair and Ms Gillard telephoned that newspaper’s CEO, John Hartigan, demanding the story by columnist, Glen Milne, be retracted.

This was done and Mr Milne was dismissed.

However, although parting with Fairfax he’s continued to pursue the Wilson-AWU affair.

This has included formal contact with Victoria Police, public addresses on this issue, including recently in Perth, and regularly updating his website on the Wilson-AWU affair.

“On 11 October, 2012, I interviewed Ralph Edwin Blewitt [AWU partner of Mr Wilson] for the first time.

“He stated that the Power of Attorney that purports to have been witnessed by Julia Gillard simply wasn’t witnessed by her.

“He said that the document was backdated, was brought to Perth by Bruce Wilson and Julia Gillard was not present when he signed it.

“I thought about that overnight, 11 October.

“I sought expert legal advice from a Queen’s Counsel who practices in criminal law.

“I reviewed Section 83A of the Crimes Act Victoria. - Creation of False Documents, penalty 10 years gaol.

“In particular I noted this provision of Section 83A: (6) For the purpose of this section, a document is false if it purports- (g) to have been made or altered on a date on which, or at a place at which, or otherwise in circumstances in which, it was not in fact made or altered;

“I waited five days for an answer. I received no answer.

“That left a substantial allegation of a serious indictable offence against Julia Eileen Gillard unanswered, the evidence unchallenged by her.

“As a result of her silence, on 17 October, 2012, I reported the Prime Minister’s conduct in the matter of the Power of Attorney to the Chief Commissioner of Police, Victoria Police Force.

“Here is a link to my original letter of 17 October.

“There’s a note on the top of it that I added about four weeks later after I received some information from police that I thought would remain confidential.

“On 12 November, 2012 a Detective Sergeant with the Fraud Squad contacted me to tell me that he was in charge of the initial investigation.

“He and I had several conversations that day and I furnished further and better particulars to him as well as some further documentary evidence.

“The detective then asked me if I could contact Ralph Edwin Blewitt and if so could I invite him to attend on Victoria Police to make a statement.

“It’s now widely known that Mr Blewitt did in fact return to Australia as a result of the detective ’s request.

Now, what does, or what could, all this mean?

I’m no lawyer so don’t offer a definitive answer.

But like others I noted Labor’s huge slump in polling following Mr Thompson’s appearance at a Sydney police station.

If anything similar should occur closer to election day - September 14 - won’t that spell utter disaster for Labor?