Myanmar Metals has identified distinct zones of unexpected cobalt, nickel and copper mineralisation at its Bawdwin deposit in central Myanmar by reassessing drill sample assay data returned over the past 12 months. Best results include a 27m intersection grading 0.16% cobalt, 0.84% copper and 1.74% lead from 164m. This included 5.5m @ 0.39% cobalt, 3.25% copper, 116g/t silver and 1.03% nickel. 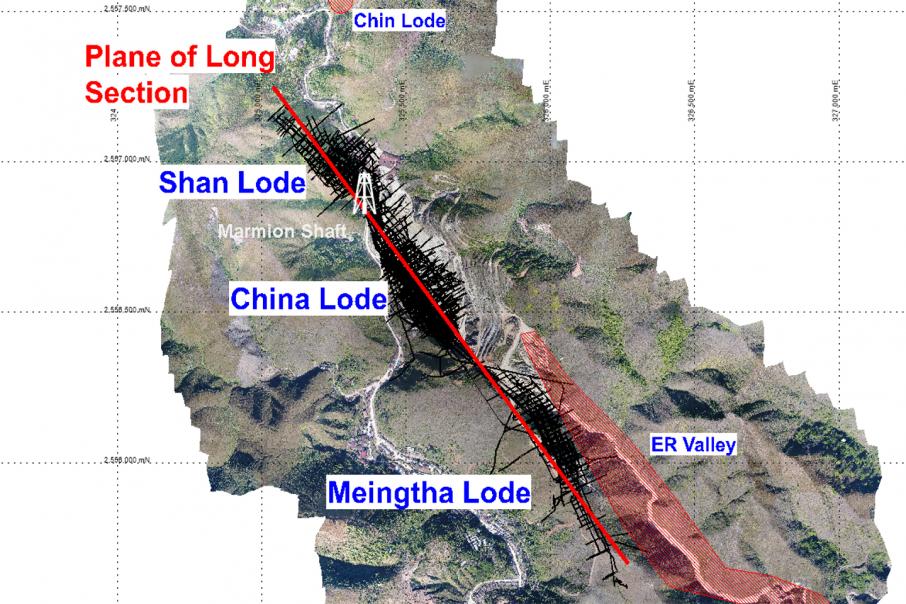 Myanmar Metals has unearthed some very significant intervals of copper and cobalt mineralisation by reassessing drill data generated over the last 12 months at its world class Bawdwin polymetallic deposit in central Myanmar.

Previous drill assays focussed on other ore minerals that are present at Bawdwin including lead, zinc and silver which makes the presence of cobalt, nickel and even some additional copper interesting, as they may change the project economics if the company can find them in significant quantities.

Re-examination of those drill assays has identified distinct zones of highly anomalous copper-cobalt and some nickel results throughout the Bawdwin mineralised zone.

Extraordinary intersections up to 27 metres grading 0.16% cobalt, 0.84% copper and 1.74% lead from 164m down-hole were returned from a review of existing data and a re-sampling program of drill samples from the 2017 program.

The identification of highly anomalous nickel in particular at Bawdwin alludes to the strongly polymetallic character of the massive sulphide ore system and the blue sky potential of the deposit, which is already a tier 1 system based on its lead endowment alone.

The company says the copper and associated cobalt and nickel mineralisation is unrelated to the primary lead-zinc-silver mineralisation at Bawdwin and is most likely a later stage event and more localised in its overall extent.

However, the copper mineralisation occurs in zones with little historic drilling coverage, particularly the northern Shan lode and deeper parts of the southern Meingtha lode.

Myanmar says the next phase of drilling at Bawdwin will focus on increasing the drill density and coverage to allow classification of the existing inferred mineral resources to a more confident indicated status in these copper-rich areas.

The current copper resource stands at 4.2 million tonnes grading 3.04% copper, 5.3% lead, 167g/t silver and 2.54% zinc and does not include an estimate of cobalt or nickel content at this stage.

Myanmar Executive Chairman and CEO John Lamb said: “We have an excellent opportunity to target and define a significant copper-cobalt-nickel resource at Bawdwin, based on an improved understanding of mineralisation controls and on zonation of mineralisation and alteration.”

“On lead content alone Bawdwin is a world class deposit. The inclusion of zinc and silver and now copper-cobalt-nickel to the mineralised system amplifies this potential.”

“Historically, the Namtu smelter produced various copper, nickel and cobalt products in commercial quantities from Bawdwin ore. The company and its partners have been investigating the source of this important value-add for the project.”

“Our drilling focus will shift to the Shan and Meingtha lodes along strike from the main China lode in the coming months as we move quickly down the feasibility path. In parallel, exploration outside of the main prospects will commence, including geophysics and geochemistry.”

The company is completing an assessment of the controls and distribution of the copper-cobalt-nickel mineralisation and the proposed new drilling will help refine this geological model.

Historically, the Bawdwin mine produced zinc and lead-silver concentrates and copper, nickel and cobalt were simply recovered as valuable by-products, as the concentrator was not properly equipped to recover these metals from concentrates.

As a result, the high-grade copper mineralisation known from Bawdwin was not exploited and no efforts were made to target copper in the ore system.

The Bawdwin deposit is a gift that just keeps on giving for Myanmar and the cashed-up small cap player can now start to expand the envelope at the project to determine what other surprises await during the next phase of exploration and development.