Factions aren’t at the heart of Labor’s problem but rather the failure to allow for dissenting votes. 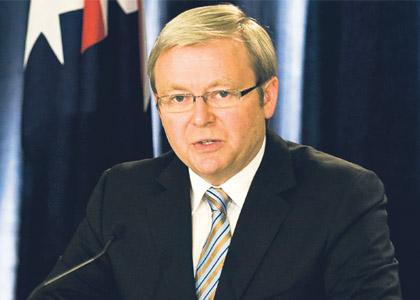 AGREED: Not surprisingly, Kevin Rudd backed Senator Faulkner’s position, adding there was something ‘‘sick’’ in Labor that needed to be healed. Photo: Grant Currall

Factions aren’t at the heart of Labor’s problem but rather the failure to allow for dissenting votes.

PROPOSALS from within the Labor Party for root and branch reform are a fairly frequent occurrence.

So when the latest round of reformist advocacy surfaced earlier this month, thanks to party elder and NSW powerbroker John Faulkner, I scanned my ALP files to find the previous time such talk was around.

It was two years ago, almost to the day.

And on December 4 2012, along came Senator Faulkner, who argued somewhat similarly during his Melbourne University Law School address titled ‘Political Integrity: The Parliament, the Public Service, and the Parties’.

‘Abolish Labor factions: Faulkner’, was the headline atop page one in The Australian.

Not only was this address widely reported, it prompted responses from several Labor MPs. All those follow-up responses were predictable, except for one.

“There is something sick which needs to be healed.”

Understandably, Mr Rudd views Labor’s faceless men as being too powerful, since it was they who plotted his eviction from The Lodge.

Then came two ministers, Bill Shorten and Penny Wong, neither who offered anything resembling penetrating remarks.

He claimed an array of hidden, what he called “informal linkages”, existed across the battered ship called Labor that adversely navigated it along.

“The key issue is patronage, the ability of a few, often trade union blocs, to control individuals,” Mr Fitzgibbon said.

He added that Labor MPs should no longer be forced to vote in line with decisions made by party factional powerbroker s.

In other words, the existence of factions isn’t the problem, but rather the fact that their members have to vote as they’re told.

At long last someone had called a spade a spade, saying it as it is.

“I believe it is time we had a debate about the very concept of binding votes through to the caucus,” Mr Fitzgibbon added.

Without wishing to exaggerate, that is the most farsighted and truly radical proposal any Labor MP has made in more than a century.

So let’s look at how this little noticed, and even less understood, encounter unfolded.

Senator Faulkner said: “Labor’s principle of caucus solidarity, developed to ensure consistency with the party platform and stability in parliament, depends for its integrity on democratic decision-making within caucus.

Agreed, except the senator is in fact arguing for Labor to maintain the status quo; that is, retain compulsion, which, as Mr Fitzgibbon has highlighted, is the cause of its problems, which begin at caucus level.

Labor MPs obey their faction chiefs because they’ve been obeying caucus decisions for more than a century.

It’s the compulsion, the forcing, the binding, of MPs to blind obedience that’s the problem, as Mr Fitzgibbon says, which Senator Faulkner won’t acknowledge.

Ponder on the first of the Faulkner paragraphs, the one speaking of “Labor’s principle of cabinet solidarity”, which he says “ensures consistency with the party platform and stability in parliament” that allegedly “depends for its integrity on democratic decision-making within caucus”.

What he’s in fact referring to, but cleverly not acknowledging, is his party’s notorious pledge that all MPs must sign to bind themselves to support every caucus decision - whether they agree with it or not.

A failure to back such mob decisions by voting against them on the floor of any parliamentary chamber means immediate loss of Labor endorsement.

In other words, any Labor MP who dares to vote against those 51 per cent decisions, rather than with their conscience or to benefit their constituents, can kiss their political career goodbye.

Senator Faulkner knows this but was nevertheless ambiguous in his wording.

Clearly he backs retention of this practice - 51 percent in, all in, right or wrong, like it or hate it - with all caucus decisions. But for some inexplicable reason he objects to the very same practice when adopted by sub-factions or factions.

Why is this “inherently undemocratic” when used by factions or sub-factions but acceptable when practiced by caucus?

If it’s good for the goose why not the gander?

What Labor must do to improve the performance of its MPs, the workings of caucus, and thus its factions and sub-factions, is scrap its more than century old practice of forcing MPs, via a pledge that threatens their endorsements if they vote against caucus decisions.

He doesn’t realise that once that’s done MPs would be far less inclined to join factions, since there would be less need for them because caucus decisions could safely be bucked.

Political suicide would cease being a possibility.

Labor MPs would be free to look closely at issues and programs and judge these on their merits, rather than relying on faction bosses for guidance on how to vote in parliament.

Such removal of factional compulsion would serve to encourage looking instead to electors and specialist advisers for guidance.

So strongly embedded is the disciplining pledge in Labor thinking that Senator Faulkner couldn’t bring himself to suggest scrapping it.

Men and women wishing to genuinely represent Australian working men and women rather than the Labor Party shouldn’t be conscripted into bowing to mob (caucus) decisions.

They should instead be free to decide, as representatives, what’s best for their electors.

That’s why Australia’s national lower house is called the House of Representatives, where its members are expected, first and foremost, to be loyal to their constituents, not their party, via a pledge that puts party loyalty ahead of voters.

To put it bluntly - it’s not the factions, it’s the compulsion that’s Labor’s problem.

Thankfully Mr Fitzgibbon had the gumption to advocate precisely that.