Coziron Resources has received further clues directing its gold exploration efforts at the Croydon Top Camp project in WA’s Pilbara region, after receiving a detailed report from a prospector who recovered 203 gold nuggets in the area. Information from this report has been integrated with other geological and geochemical data from Croydon and will be used to identify and prioritise targets for further field programs. 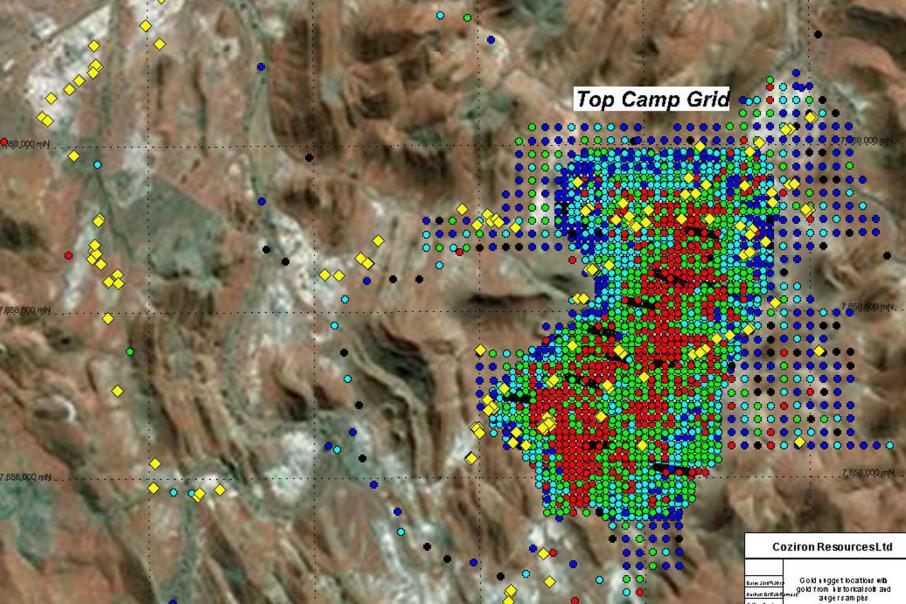 ASX-listed Coziron Resources has received further clues directing its gold exploration efforts at the Croydon Top Camp project in WA’s Pilbara region, after receiving a detailed report from a prospector who recovered 203 gold nuggets in the area.

Management said that while the recovery of coarse gold particles by prospectors is not economically significant, the reported distribution has been plotted and integrated with other geological and geochemical data from Croydon.

This information will be used to identify and prioritise targets for further field exploration work.

Coziron said the nuggets were recovered from sites where carbonate-rich rocks of the Mallina Basin are fractured by regional northeast to north-northeast-trending faults and where the surface geochemistry is strongly anomalous in gold-pathfinder elements such as arsenic and antinomy.

These broad zones of arsenic and antinomy and more localised enrichments of copper, molybdenum, silver, zinc, lead and tungsten are geochemical indicators for structurally-controlled deposition from an intrusion-related system, according to the company

Additionally, the geological setting for gold anomalism at Top Camp show similarities with the large, carbonate-hosted Sadiola Hills gold deposit in western Mali and represents a new target-style in the Pilbara region.

The company plans to carry out RC drilling at Top Camp to across the broad zones of gold anomalism detected by surface sampling to acquire subsurface material from the veins and adjacent host rocks.

Coziron will also prioritise surface sampling and mapping for the Middle Valley area, which extends from 1km west to 2km north of the Top Camp prospect.

The distribution of coarse gold recovered by prospectors in the Middle Valley area indicates that gold is being liberated from veins along major faults, that are visible in the aerial imagery.

With fellow Australian De Grey Mining actively evaluating the lode-style deposits near the Indee Mine and an intrusion related-deposit at Toweranna to the northeast of Coziron’s ground, the company’s upcoming activity appears timely given the emergence of the Mallina Basin as a new gold province.

De Grey has already defined a JORC mineral resource of 357,000 ounces at Toweranna, making it a major component of the company’s nearby 1.7 million ounce Pilbara gold project.