Mrs Brown Court on the Flipside

An opportunistic approach to business has served a local hospitality couple well. 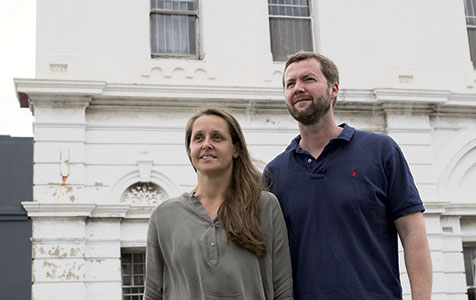 Hamish Fleming and Siobhan Blumann are quickly building up a stable of hospitality venues from North Fremantle to Como and Northbridge. Photo: Attila Csaszar

THE reputation of Hamish Fleming and Siobhan Blumann’s hospitality businesses precedes them, with Flipside Burgers, Mrs Brown Bar and The Mechanics Institute among Perth’s best-recognised venues.

While they operate very much behind the scenes and have a low-key approach to business, there’s little doubt they couple will be taking on a more public profile as they open larger venues across the city.

Business News revealed last week that Mr Fleming and Ms Blumann were the buyers of The Court Wine Bar and Restaurant in Beaufort Street, Northbridge.

They’re also behind plans for a small bar in the North Fremantle Town Hall and recently secured the leasehold on a venue in Como, where they are planning to open their fourth Flipside burger joint.

Speaking to Business News from their first small bar venture, Mrs Brown Bar in North Fremantle, they are clearly on friendly terms with the locals, waving every few minutes to people strolling past.

Their first Flipside is next door, which opened more than seven years ago and serves as Mrs Brown’s ‘kitchen’ – a concept they’ve replicated with The Mechanics Institute small bar and Flipside pairing in Northbridge.

Across the road is the North Fremantle Town Hall, where they’re planning to establish their third small bar and an all-day cafe (to be called Guildhall and Propeller respectively).

It’s a busy time for the pair as refurbishment of the town hall and additional building is expected to begin before year’s end, with the opening planned for April 2014.

A similar timeframe is planned for the fourth Flipside site in Como, while settlement on The Court is expected this month, with the couple to begin trading shortly thereafter.

“We didn’t ever plan for everything to happen at once,” Mr Fleming says.

“It’s just the nature of how opportunities have arisen.”

The opportunistic outlook is how the couple have expanded their reach across Perth, with the first Flipside a perfect example – the lease on the North Fremantle venue was secured well ahead of any firm plans for a business.

The decision to buy The Court happened much the same way, with the opportunity to run a business from such a historic venue simply too good to pass up.

The couple plan to begin trading without making any changes to the wine bar until they get a feel for the venue, which housed a Macedonian restaurant and bar for decades.

The couple say gaining an understanding of the site is important and as yet they haven’t formulated a concept for it.

“That site is so steeped in history,” Ms Blumann says.

“Everyone has a story about The Court Wine Bar, so we need to strike that balance between respecting its past and perhaps giving it a new face, but we don’t think the answer is completely gutting it.”

She says the decision to buy the North Fremantle Town Hall in partnership with friends brought with it a similar responsibility to that in Beaufort Street, with locals keen to know their plans.

While they have businesses dotted across Perth, it’s clear developing the North Fremantle neighbourhood is a labour of love.

By mid next year the couple will be running four separate venues in the Queen Victoria Street strip between Tydeman Road and Stirling Highway, but aren’t protective about it being their ‘territory’.

Neighbouring cafe Harvest has recently been sold with the new owners planning a different concept, which Mr Fleming says will add diversity to the area.

“Our hope, over time, is that North Fremantle will become a hub the same way as Highgate and Mount Lawley,” he says.