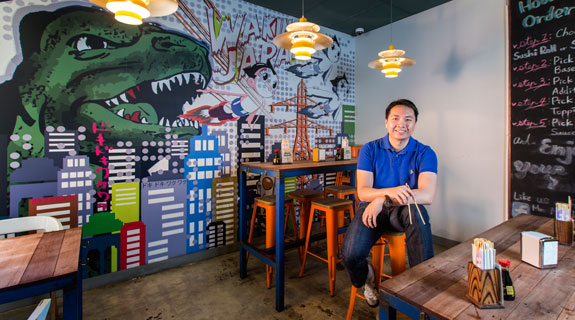 Cult Mt Lawley sushi restaurant Mr Munchies is expanding to Victoria Park, with a big new venue to open by the end of next month.

Owners Henry Susanto and Ricky Hsu have leased a former bank building on Albany Highway, with the new restaurant to seat more than 100 patrons.

The lease deal was brokered by Colliers International.

Mr Munchies unique take on sushi has made it extremely popular among Mt Lawley punters, with its design-your-own menu allowing patrons to make sushi with unlikely ingredients like German sausage and grilled steak, as well as traditional options.

The new restaurant will combine a sushi train with a choose-your-own menu.

“With the new stadium, redevelopment of Crown Perth and lots of apartment developments, this is an area that is really coming along,” Mr Scott said.

“The ongoing unification of the retail strips in Victoria Park and East Victoria Park means the area will become a retail and nightlife destination.”