Villa D’Este has a solid following in West Perth and beyond. Emily Morgan reports. 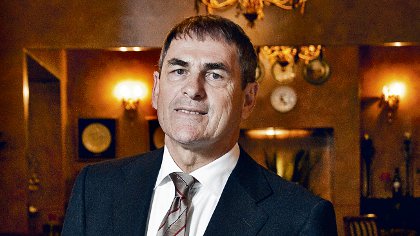 PRIORITIES: Enrico Moschetti says developing a loyal customer base for dinner is important at Villa D'Este, given the 'daytime nature' of West Perth. Photo: Grant Currall

VILLA D’Este founder Enrico Moschetti has learned many lessons in the 45 years since he set out on a globetrotting adventure on the back of a career in hospitality management; but one stands out from the rest.

“The best lesson in this trade is, you are only as good as your staff is; if you have good staff, you can have a good place,” Mr Moschetti told Gusto.

Having discovered the joys of the hospitality game by watching his brother manage an Italian ‘pensione’ restaurant, Mr Moschetti developed a career in managing the front-end of restaurants in Switzerland and Germany and, by the time he was 23, he had set up a restaurant of his own in Italy.

The staffing lessons came in handy when he made the move to Australia, where he established Enrico’s in Osborne Park in 1980, and Villa D’Este in 1994, which is now counted as one of West Perth’s most established restaurants.

Enrico’s was more a cafe than a restaurant, and Mr Moschetti changed his staffing strategy accordingly.

“Here I have to rely more on professional people,” he says of Villa D’Este’s fine-dining requirements.

Enrico’s was a different formula, with young staff – whose role in hospitality was typically ancillary to studies – trained up.

At Villa D’Este, though, to provide good service and top meals, Mr Moschetti hired professional staff focused on a career in hospitality.

Over the years, he has developed a number of strategies to hold onto his staff.

The restaurant’s pasta maker and some wait staff have been with him for between five and 17 years and, more recently, Mr Moschetti has come across a cohort that has added extra authenticity to the establishment.

“Somehow at the moment there are a lot of Italians around,” he says.

With skilled wait staff a rarity, Mr Moschetti says keeping hold of his staff is paramount and he does this through ‘treating them right’.

By that he means the obvious – considerate rostering and good pay brackets – but he also places trust in them and likes to avoid creating conflict; basically, he picks his battles.

“I have been in the industry for 43 years now, and you know how to talk to people,” Mr Moschetti says.

When recruitment became difficult during the last boom, Mr Moschetti focused on recruiting staff from overseas.

“You could find no staff in Perth, for me I had to rely on Europe. I got in about five people sponsored, because it is the only way to keep going,” he says.

Sponsoring wait staff for visas on the basis of having expertise in the field proved to be difficult following the boom, however.

“Sponsoring became very hard lately. After the downturn they really stopped everything but lately they have been opening up a little bit again,” Mr Moschetti says.

“For some reason, when it comes to sponsoring, to do a chef is easy, but to sponsor people in the restaurant like specialised waiters, they don’t recognise them in Australia, it isn’t recognised as a profession, so really it is very hard.

“It isn’t like Italy, where you advertise for a waiter and you get a waiter; you cannot do that here.

“I guess now there are a lot of places around now, so the few that are here, there isn’t enough for everybody.”

Mr Moschetti says business in West Perth has changed over the years.

“The lunch trade is good, but people don’t have that much time to go for lunch anymore. They used to go out and stay, now they want to come, eat quickly and go,” he says.

To cater to both the lingering lunchers and quick bite brigade, however, Villa D’Este developed a set business lunch and the a la carte menu, both of which Mr Moschetti says the restaurant’s highly organised kitchen helps to deliver in reasonable time.

Developing a loyal customer base for dinner service is also important, he adds, given the ‘daytime nature’ of the area.

“West Perth is not a place where people walk past and stop in, you have to have the clients, Mr Moschetti says.

“We are very established as a place. To build up it takes about four or five years. Good service and good food, looking after people, that is the only recipe, really.”