Hammer Metals’ ongoing rock chip program has returned some extraordinary high grade results of up to 18.4g/t gold, 76g/t silver and 15.15% copper at the new Toby prospect near Mt Isa, Queensland. Follow-up sampling of and mapping of both the Toby and Charlie prospects is underway with results expected soon. The company will also carry out a sub audio magnetics survey and RC drill program at the Perentie project. 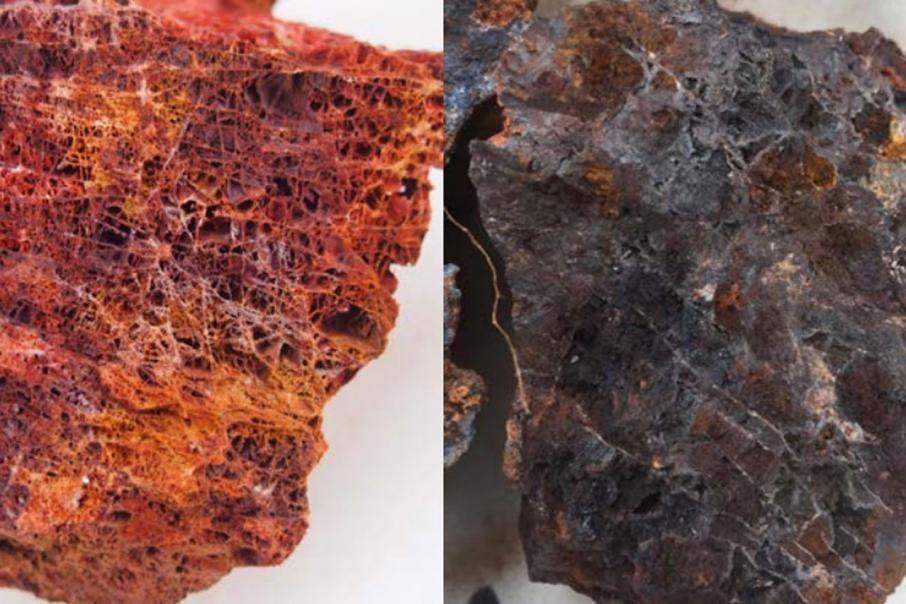 Examples of gossan from the Toby Prospect (left) and Charlie Prospect

Hammer Metals has continued its extraordinary run of success with its ongoing rock chip program near Mt Isa in Queensland with the latest results showing grades up to 18.4 grams per tonne gold, 76g/t silver and 15.15% copper.

This follows on from last month’s spectacular rock chip samples of up to 31% copper, 19g/t gold and 240g/t silver at the Perentie project to the southeast.

The rock chips are sourced from the new Toby prospect, which is located 8km north of the company’s Kalman deposit. It was discovered by Hammer personnel investigating a group of VTEM conductors near the intersection of the Ballara, Kalman West and Pilgrim Faults.

Several zones of outcropping gossan over a strike length of 400m were found in the area that is mostly obscured by thin soil cover.

Subsequent prospecting resulted in the discovery of the smaller Charlie VTEM anomaly about 500m to the northwest of Toby.

Reconnaissance sampling at the Charlie prospect identified a zone of gossanous red rock breccia up to 40m thick whilst initial rock chip samples returned peak grades of up to 1.36g/t gold, 25.6g/t silver, 1.2% copper and 1.23% zinc.

Follow-up sampling and geological mapping of Toby and Charlie is underway with results expected soon.

Separately, the company will carry out a sub audio magnetics survey and RC drilling program at its Perentie project before the end of November.

“The location of these prospects along strike from Hammer’s Kalman deposit is encouraging and we look forward to bringing shareholders more news from Toby and Perentie in coming weeks.”