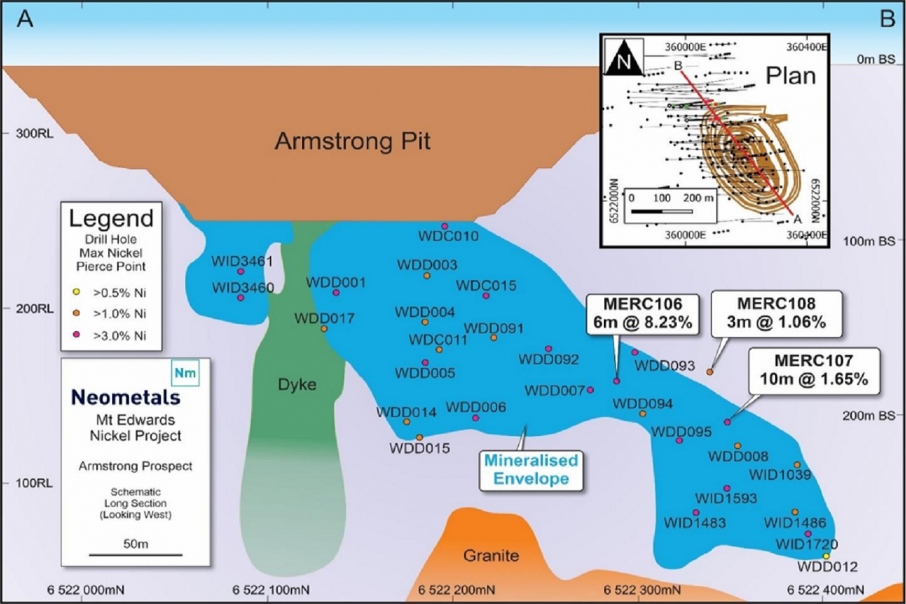 Neometals has bagged more massive nickel sulphide intercepts at its Armstrong deposit, just 90km south of Kalgoorlie.  RC drill assays from holes at the old abandoned pit include 6m grading a serious 8.11% nickel, including 5m grading 9.63% nickel from 206m.  Other intercepts in the disseminated nickel zone include 34m at 1.94% nickel from 185m and another 24m intersection grading 1.13% nickel from 237m.

Neometals has just completed two months’ worth of RC drilling that covered 11 holes for 2,083m across two tenements and included three RC holes for 826m at the Armstrong deposit.  The latest drill holes are located to the northwest of the abandoned open pit at Armstrong and all holes were drilled in an easterly direction through the ore body.

The latest activity was part of a frenzy of drilling and exploration across Neometals’ various deposits and prospects aimed at methodically validating and improving its drill hole data base.

The recent drilling at Armstrong was planned to in-fill and test extensions to the existing mineral resource of 320,000 tonnes at a very respectable 2.6% nickel for 8,180 contained nickel tonnes.  The drill holes were targeting the interpreted down plunge of the mineralised zone and associated high grade shoots.

Neometals is now considering a campaign of diamond core drilling at Armstrong to further understand the structural and metallurgical properties of the deposit. The company said other ground geophysical surveys are planned to augment the subsurface geological knowledge gained from the drill holes and EM surveys.

Neometals Managing Director, Chris Reed said: “These strong results from Armstrong continue our success in identifying massive nickel sulphide mineralisation within our existing inventory. In preparation for a strengthening nickel market in the medium term, driven by increasing demand in the battery materials sector, Neometals will undertake mining studies and develop a pipeline of short lead time nickel sulphide resources.”

The Armstrong deposit is part of the Mt Edwards nickel project that is centred around the small township of Widgiemooltha, just 90km south of Kalgoorlie along the Coolgardie-Esperance highway in Western Australia.

One of the most southern of the cluster of tenements that make up the Mt Edwards nickel project is located directly north and along strike from Mincor Resources’ Cassini mineral resource. Mincor has recently reported an upgraded mineral resource at Cassini of 1.0Mt at 3.8% nickel for 37,800t of contained nickel and an ore reserve report is due in the current quarter.

Mr Reed said: “The successful discovery of nickel sulphide mineralisation along strike from Cassini just inside the boundary of a newly acquired tenement provides encouragement that our extensive tenement package around the Widgiemooltha Dome is one of the most prospective areas for greenfields nickel discoveries.”

It seems clear now that Neometals is building a string of nickel pearls as it drills up its tenements, with multiple hits being reported along trend at Mt Edwards.

Substantial shareholders as published in the annual report.
END_OF_DOCUMENT_TOKEN_TO_BE_REPLACED
Powered by Morningstar ® 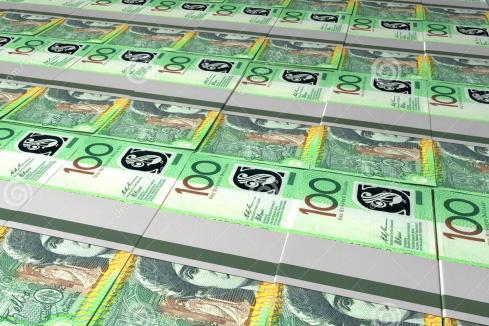