Perth-based explorer Kingwest Resources continues to make waves in the Goldfields of WA with an initial aircore drilling campaign at the Goongarrie gold project returning significant results from three areas where the company appears to have defined a gold anomaly over 1,000m in strike length at Area 9. Further drilling on newly identified targets at the project is planned for quarter two. 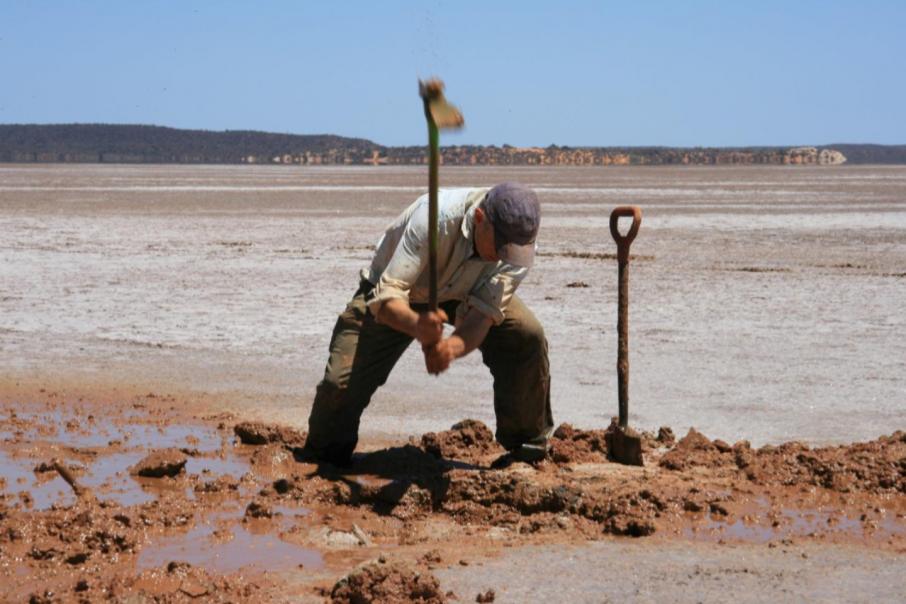 Perth-based explorer Kingwest Resources continues to make waves in the Goldfields of Western Australia with an initial aircore drilling campaign at the Goongarrie gold project returning significant results from three areas where the company appears to have defined a gold anomaly over 1,000 metres in strike length at Area 9. Further drilling on newly identified targets at the project is planned for quarter two.

Located in the world-renowned Goldfields of WA, Goongarrie lies some 90 kilometres north of Kalgoorlie and 40km south of Kingwest’s Menzies project. Earlier this month the company announced a resource increase at Menzies, bumping the total precious metal count at that project by 125,000 ounces of gold to an impressive 446,200-ounce total.

The gold-rich Bardoc Tectonic Zone which totals over 90 million ounces of gold endowment in WA passes beneath a salt lake cover at Goongarrie. According to management, past explorers have overlooked the area due to the salt lake cover which can conceal any potential mineralised outcrops.

Kingwest recently completed a maiden 381-hole aircore drilling program for 10,683 metres across five targets at the project. Significant gold results have been returned for Targets A9 and A9 North along the southern borders of the tenure, together with Targets A5 and A6 in the central parts of the landholding.

At Target A9 on the southern edges of the project, drilling has defined a 1,200m long by 300-metre-wide anomalous gold zone that is open along strike in both northerly and southerly directions. According to management, the prospect lies on the same geological setting as ASX-listed Ardea Resources’ Aphrodite North gold discovery just 200m to the south.

Previous drilling by Kingwest at Target A9 returned an eye-catching 6m interval going 17.2 grams per tonne gold from 94m depth. Deeper drilling is required to get into the bedrock which is covered by up to 50m of sediments and exhibits gold depleted weathering zones at shallower depth.

At the A9 North prospect nearby, drilling has intersected a 200-metre-wide zone of anomalous gold. Deeper drilling to test the bedrock beneath the weathering zone and to the north and south is needed now according to Kingwest.

Some 10km to the north of A9, further anomalous hits were returned at Target A5 and Target A6.

A stand-out interval of 4m at 1.34 g/t gold from just 6 metres was reported at A6 as part of a broader 300m wide anomalous zone. The mineralisation remains open for 500m to the north and 3,000m to the south according to Kingwest. A further gold anomalism was returned at A5 including 4m at 0.35 g/t gold from 34m. Both targets require deeper drilling beneath the weathering zones.

Kingwest Resources Chief Executive Officer, Ed Turner said:  “Our exploration programs at Goongarrie continue to indicate how prospective the project is for major gold deposits. We look forward to following up these results with more detailed drilling at Target A9 as well as initial drilling of Targets A1, A2, A3 and A10 which lie under the salt lakes in the north of the project”

The company has now completed a high-resolution aeromagnetic study along with geochemical pitting on the western half of the Goongarrie Salt Lake, which according to the company, was previously inaccessible. Strongly gold-anomalous drill targets A1, A2, A3 and A10 have all been pinpointed by Kingwest as potentially lucrative targets now with the most enticing being A10.

According to management, the geological setting of A10 is similar to the 6.4-million-ounce Kanowna Belle gold deposit 80km along strike in a south-easterly direction that is operated by gold mining behemoth, Northern Star Resources.

The company believes unusually high levels of gold values in some pits, particularly Kingwest’s most promising magnetically defined lithostructural targets, may relate to underlying gold mineralisation. Drilling is due to test the A1, A2, A3 and A10 targets in the second quarter of this year and results will no doubt be highly anticipated.

Kingwest continues to generate some compelling targets for follow-up drilling in this rolled gold mineral address and all eyes will be focused on this emerging explorer as the rods start spinning again in the upcoming quarter.