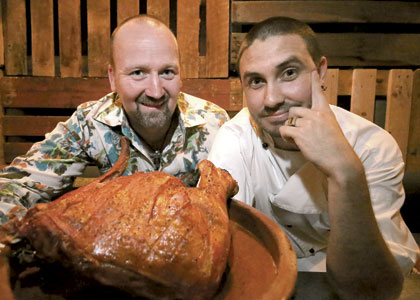 IAIN Lawless and Liam Atkinson aren’t concerned about image or popularity, which partly answers any questions as to why two respected Perth chefs would open a saloon-style restaurant in Inglewood.

Both admit the location, on the corner of Beaufort Street and Ninth Avenue, is far enough away from thriving Mount Lawley to be considered ‘uncool’; but that was precisely what they were looking for.

“We don’t want to go down into Beaufort Street where everybody else is; we want to try and create something new and get out of the cool area,” Mr Atkinson told Gusto.

“The number of people who have walked by and come in to say they can’t wait until we open, that they’ve been looking for something like this to open in the area, it just makes us feel like we’ve got it right.”

It’s those local customers the pair is aiming to please with their North American-inspired restaurant.

“Our locals are our number one,” Mr Atkinson says.

“We try to keep prices down and create a restaurant they can visit once or twice a week. It’s not a destination-restaurant.

The pair started the new business venture following a 13-year relationship, which began with Mr Atkinson as an apprentice in Mr Lawless’s kitchen at The Oriel in Subiaco.

Mr Atkinson then led the opening of Mr Lawless’s Kitsch bar and later moved on to run the Lawless Cooking catering and cooking school for three years.

He then headed off on a trip around Canada, which sparked enthusiasm for a saloon-style restaurant in Perth.

Trying to shift the perception that American and Canadian food is all burgers, ribs and chicken wings may be challenging, but Mr Atkinson says there is much more to it, which is something he aims to showcase at Miss Kitty.

“The produce in Canada and even in America is just amazing; you’ve got all the small suppliers and growers and it’s just really inspiring when you cook over there,” Mr Atkinson says.

“There is a lot of fast food over there, but if you look in between there are some amazing restaurants.”

The menu at Miss Kitty somewhat reflects Messrs Lawless and Atkinson’s attitude to opening a quirky restaurant in an uncool part of town – they’ll be serving caviar with eggs and fries as well as banoffee pie made with hundreds and thousands.

“People are going to look at it and they’re just going to start laughing; it’s going to take them back to sitting in a park with hundreds and thousands on a piece of bread,” Mr Atkinson says.

“It’s very child-like but it’s awesome food and that’s what I want.”

Mr Lawless sold Kitsch in Leederville last June and is in the process of applying for a small bar licence for a venue in Mount Lawley.

While Mr Lawless is backing the Miss Kitty venture, and is acknowledged as a partner, he says the restaurant is really about providing his former apprentice with a chance to shine.

“If Liam needs someone to talk about food with and to work out a recipe then that’s what I’m here for,” Mr Lawless says.