Industrial auctioneer Smith Broughton had its biggest ever auction in September, with $14.3 million worth of used mining kit sold under the hammer. 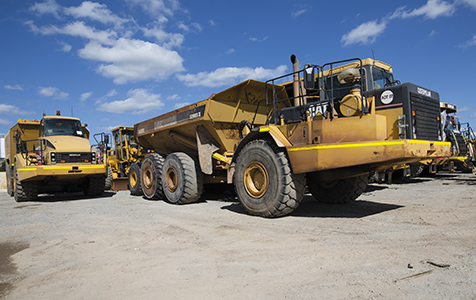 Industrial auctioneer Smith Broughton had its biggest ever auction in September, with $14.3 million worth of used mining kit sold under the hammer.

The October auction may still be more than a fortnight away (October 29), but on current forecasts it’s expected to reap as much as $12 million.

It’s a busy time for Smith Broughton, which is setting new sales records despite the soft prices for certain classes of heavy machinery.

Prices for some equipment have slumped by as much as 30 per cent, and the falls are even steeper for some specialised machinery.

Smith Broughton heavy equipment manager Eddie Johnson is working at the coalface of the mining slowdown.

His clients are miners, contractors and equipment hire operations that are offloading machinery in a bid to cut costs or simply survive.

He said the second-hand market for very large equipment had shrunk considerably in the past five to eight years as many of the smaller operations were bought out or had gone out of business.

“There’s virtually no-one in that space any more and they were the people who used to buy the large, second-hand mining equipment,” Mr Johnson said.

“For the size of the market and the amount of work there is to do here, there is just too much equipment in the country.”

He said it was hard to predict how long it would take for this glut to wash through the system, with much depending on commodity prices and the value of the Australian dollar.

“If our currency keeps falling down to where the banks seem to want it to do to – 80 cents – that will give everyone a bit of breathing space,” Mr Johnson said.

The current auction volumes are also setting a new high water mark for the 37-year old auctioneering business, but the clearance rate remains strong at 90 per cent in September.

And in many cases it’s the same people buying and selling.

Some of the buying is simply opportunistic, but even some of the larger, diversified hire companies are understood to be in the market for select pieces of equipment.

“And then there are guys buying the 10-year-old equipment, who might only want to use it for 200 hours a year.”