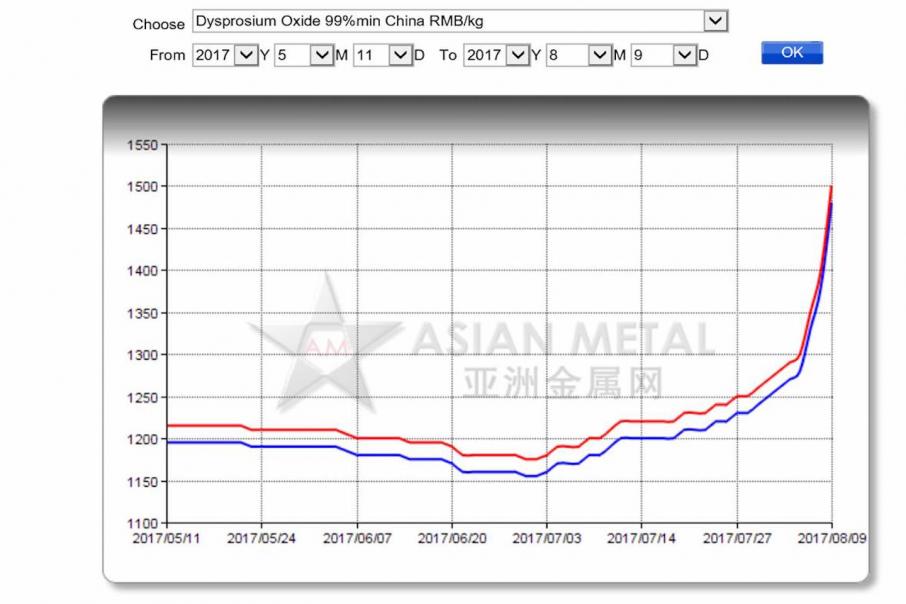 It seems that the mining gods have caucused and the result is that Northern Minerals shall be rewarded for their bold decision to build Australia’s first heavy rare earths mine.

In an exquisite piece of timing, a Chinese government crackdown on illegal mining has sent prices soaring for Dysprosium — the key rare earths product to be churned out from Northern Minerals’ soon to be built Browns Range mine near Halls Creek

The long-running efforts by the Chinese government are now reportedly affecting global supply of heavy rare earths and contributed to a 20% jump in prices for Dysprosium in the last fortnight alone.

The ASX-listed junior is aiming to be the first significant producer of Dysprosium outside of China courtesy of the Browns Range project. The company is planning to ship its first shipment of heavy rare earths carbonate, rich in Dysprosium, in the first half of 2018.

Dysprosium is a vital component in the manufacturing of motors for wind turbines, electric vehicles and a host of other applications. Demand outlook has been strong for some time thanks to the clean-tech boom, however China’s crack down on illegal miners will no doubt restrict global supply.

In a release to the ASX on Thursday, Northern reported that Asian Metal had reported a 20% increase in the spot price for Dysprosium Oxide in the last fortnight.

The company stated that it understood part of the price shift could be attributable to a crackdown by the Chinese government on illegal mining. The crackdown began in 2010, however, news reports out of China indicated that it had recently begun affecting supply.

Northern MD and CEO, George Bauk, said “As we develop the Browns Range pilot plant project, the first hard-rock Dysprosium operation outside of China, we are confident that increased demand from electric vehicle and renewables uptake, coupled with declining supply in China, will positively impact the company.”

The market already seems to agree, with Northern’s share price climbing by 37% since the start of August.

The mining gods work in weird and wonderful ways and just a little smile here and there for a favoured company can result in shareholder riches.

For now at least, Northern Minerals appear to have curried favour with the gods as they launch headlong into their new Browns Range project.

Substantial shareholders as published in the annual report.
END_OF_DOCUMENT_TOKEN_TO_BE_REPLACED
Powered by Morningstar ®