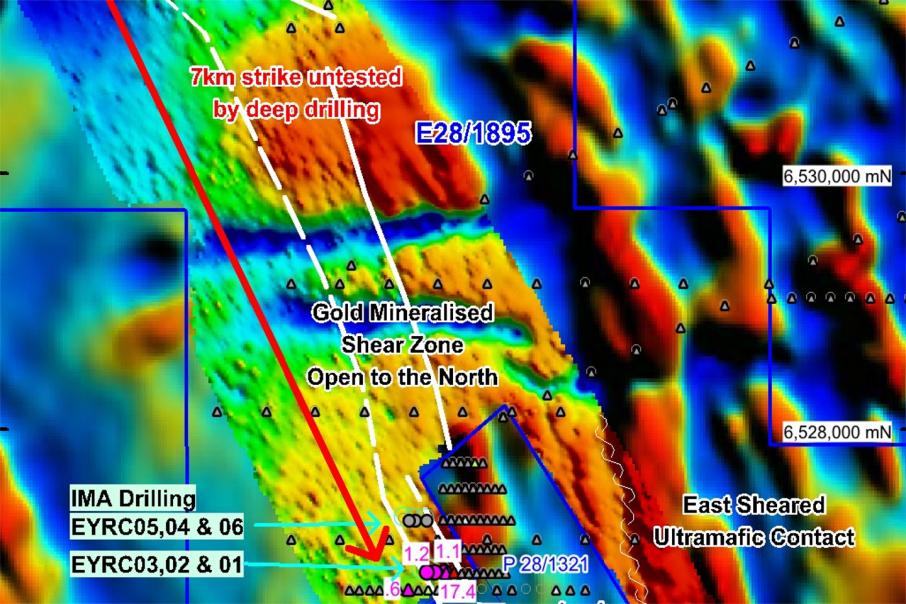 Image said there is a further 7km of virtually untested strike northwest of the existing King gold mineralisation at Erayinia and the company is planning a close-spaced, shallow, 60-hole aircore drilling program to map out gold enhanced supergene mineralised zones.

Based on results, Image will then follow up this work with deeper RC drilling programs on priority areas.

At least 16 separate other gold enhanced supergene zones have been identified historically at the prospect.

Gold mineralisation is hosted within a sheared, bleached and silicified mafic unit and occurs within quartz lodes accompanied by pyrite and carbonate minerals.

According to Image, further work is also required elsewhere on the tenements to follow up on positive historical results from aircore drilling that returned up to 2m @ 2.86g/t gold from 28m down-hole, 2.8km southeast from the most recent intersection.

Outside of Erayinia, the company’s exploration efforts are primarily focussed on programs aimed at expanding the mineral sands resource inventory and ore reserves around the company’s flagship Boonanarring and Atlas deposits just north of Perth.

70% of the revenue at that project is expected to come from the highly sought-after zircon mineral..

The company is planning a significant campaign of resource development drilling around these deposits starting next month.

According to Image management, the Boonanarring mine construction is advancing on budget and largely on schedule with overall project development about 50% complete at end of June 2018 and on-track for commissioning in the December quarter this year.

The company is also undertaking botanical studies and lining up exploratory drilling at its Bidaminna and Woolka prospect areas, which it describes as having significant blue-sky potential across the broader mineral sands project area, centred 80km north of Perth in W.A.