IT takes great patience and determination, dedication and creativity to craft a fine beer. 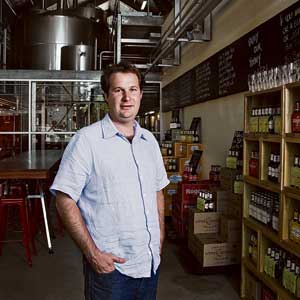 ALL ABOUT THE BEER: Miles Hull and the team at Little Creatures are focused on producing the best beer possible

IT takes great patience and determination, dedication and creativity to craft a fine beer.

But a beer by itself is just another beer in a competitive marketplace. To take your brew to a wider audience you need a sound business strategy, a point of difference about your offering, and a great sense of timing.

Without doubt Little Creatures ticks all those boxes.

The Fremantle microbrewery has enjoyed remarkable popular success with a broad cross-section of punters since it opened its doors about eight years ago.

Built adjacent to the harbour in unassuming industrial sheds close to the statue of Bon Scott, Little Creatures has created its own distinctive style and atmosphere. For many, 'a night at the pub' will never be the same again.

After 18 months' work, the microbrewer has just completed the latest phase in its development with a new and bigger brew house, a revamped alfresco area, an expanded kitchen and a new bar to match increased brewing capacity.

Little Creatures chief brewer Alex Troncoso says the refurbishment has been a deliberately slow and meticulously thought-out process, much like the brewing process.

In fact, the requirement to increase brewing capacity was the key reason for Little Creatures' listing on the ASX a few years ago, at which time it raised $21 million to fund the expansion.

"First of all we have put a lot of attention into our utilities, so our new refrigeration plant, air compressor and boiler all maximise their efficiencies," Mr Troncoso told Gusto.

For example, the new refrigeration plant and air compressor operate with variable speeds and respond to demand, cutting the brewery's electricity usage by more than 30 per cent.

The new boiler has an energy recovery system on the exhaust, which provides better control over combustion, providing a 10 per cent energy saving.

"Then a big difference in our brewing is that with our wort boiling we have energy recovery there so we have reduced our energy demand by two-thirds," Mr Troncoso says.

During the wort stage of brewing, liquid is extracted from the mashing process, with the wort containing the sugars that will be fermented by the brewing yeast to produce alcohol.

"Generally speaking, the construction of the plant, everything is of a higher standard of installation and more attention was put into insulation to try and minimise unnecessary energy loss," Mr Troncoso says.

"A few years ago we started getting so busy that we had to start doing some automation, and what this project's done now is basically helped us make great beer. We were already making the beer great; it's helped us do it more often - all the time in fact."

As a former chemical engineer and brewer at Belgium's Anheuser-Busch InBev - the international brewer of global flagship brands such as Beck's and Stella Artois - Mr Troncoso says Little Creatures offers a working environment unlike any other.

While other microbreweries in WA have reduced capacity, Little Creatures has focused on steady and sustained growth.

In mid-2009, the brewery expects to roll-out a new ale from its newly commissioned brewery in Hillsville in the Yarra Valley, Victoria.

Head of creative development at Little Creatures, Miles Hull, says the microbrewery is yet to realise its entire masterplan, with works ongoing.

"We have redesigned both the front and back courtyards in an effort to make them a lot more comfortable and of course take advantage of the water views out the back," Mr Hull told Gusto.

"We actually had our admin office out the back taking up prime waterfront real estate, which we have now relocated offsite, allowing for the installation of a new bar and something we love the most, a waterside bocce pit.

"Fremantle has always been our home and the base of our operations to which we have had an open door to the public from our start. It has been this interface between our brewery and the public that has been key to our growth over the years and any disruption to this would have been like starting over again.

"It has always been our ambition to provide a unique industrial tourism destination and now with our increased operations we are able to provide a greater and more varied experience to an increased range of visitors."