The hit to Australian food exports imposed by Russian sanctions is not the end of our involvement in Eastern Europe’s latest political power play. 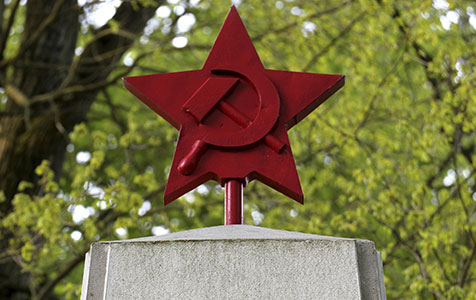 AH, THE GOOLD OLD DAYS: Vladimir Putin has said that the collapse of the Soviet Union was the “major geopolitical disaster of the [20th] century”.

Bilateral trade between Australian and Russian was valued at just less than $1.8 billion last year.

A bit more than $400 million of that was for Australian food products, upon which the Putin government has now placed a ban for one year.

Russia’s economy is the world’s eighth largest – slightly smaller than Brazil’s and marginally larger than Italy’s.

Western Australia’s economy may face some, but not catastrophic, cancellations.

Even so, it means the fallout from Moscow’s retaliatory boycott will affect Australia’s agricultural sector more than most.

The reality facing Australia is that two-way trade over the current year is likely to reach about $1.4 billion, not $1.8 billion, as could have been expected.

But that’s a small price to pay to be alongside the US, Canada and European Union, which have imposed three rounds of sanctions following Russia’s annexation of the Crimea from Ukraine, and continued fifth column activities aimed at dismembering that country.

Russia has also placed embargoes on imports of food products from the US, Canada and Europe.

The founder of the bolshevik totalitarian movement, Vladimir Lenin, in 1919 created the Comintern – a grouping of the world’s communist parties headquartered in Moscow.

This body set about communising humanity via subterfuge, espionage and fifth column and related activities that focused on penetrating trade union movements, labour parties and public services; especially foreign offices and defence and intelligence agencies, as disclosed by the royal commission into the Petrov Affair in 1950s Canberra.

Lenin’s successor, Josef Stalin, despite initiating a policy called ‘socialism in one country’, in fact beefed-up Moscow’s earlier imperialistic moves that had built on the 1917-18 Leninist coup d’etat, during which not only European Russia, but most of Belarus and Ukraine, plus the Caucasus and Mongolia were bolshevised.

Then, in 1939, Stalin teamed up with Adolf Hitler to annex Estonia, Latvia, Lithuania, eastern Poland, and segments of Finland and Romania.

Despite Hitler’s double cross by invading the Soviet Union in June 1941, Stalin, with crucial material and other assistance from Britain and the US, was able to extend bolshevism into central Europe following Nazi Germany’s defeat.

During 1945-49, Stalin helped to bolshevise China and North Korea.

Twenty years later came the infamous declaration of the Brezhnev Doctrine justifying the Moscow-led Warsaw Pact’s invasion of Czechoslovakia, which had sought to extricate itself from Muscovite domination (as Ukraine did with the recent occupation of Kiev’s Maidan Square).

Remember that, in April 2005, this veteran KGB officer said: “Above all, we should acknowledge that the collapse of the Soviet Union was a major geopolitical disaster of the [20th] century.”

After which he added: “As for the Russian nation, it became a genuine drama.

“Tens of millions of our co-citizens and co-patriots found themselves outside Russian territory.

“Moreover, the epidemic of disintegration infected Russia itself.”

So much of what President Putin has initiated since becoming Russia’s second and fourth president – in 2000 and 2012 respectively – suggests he’s working to neo-bolshevist agendas, including reconstructing a Leninist-Stalinist imperium.

That’s certainly the view of John Bolton a onetime American ambassador to the United Nations.

“I think Putin knows that he has the high cards, militarily, economically and politically, and he’s prepared to use them,” Bolton says. “It’s clear he wants to re-establish Russian hegemony within the space of the former Soviet Union. “Ukraine is the biggest prize, that’s what he’s after. “The occupation of the Crimea is a step in that direction.”

As pointed out in this column after that occupation (Putin pursues neo-Stalinist plan, March 17 2014), President Putin’s blueprint emanates from the writings of a Rasputin-like political theorist, Aleksandr Dugin, who admits to being influenced by, amongst others, German general and geopolitician Karl Haushofer (1869-1946).

Geopolitics is a strange grab bag of unsubstantiated theories, assumptions, crackpot ideas and schemes that often appeal to cranks and/or authoritarians.

Hitler’s attraction to it and Haushofer became the basis of his top secret Generalplan Ost, his settlement template once Berlin had conquered all Soviet lands west of the Ural Mountains.

Only time will tell how President Putin’s geopolitical plotting unfolds.

Judging from Dugin’s perspectives it almost certainly means continued concerted moves to forge a land-based imperium to confront the liberal West, of which distant food-producing Australia remains a part.