Kingwest Resources recent Menzies acquisition looks like it might provide a payday for the ASX listed junior with ounce plus hits spinning off the drill bit. Latest results include 0.3m grading 71.3g/t within a broader zone of 1.5m grading 14.33g/t. This gold hit is located an impressive 100m below the known mineralisation at the historic Lady Shenton mine, potentially extending the length by at least 100m. 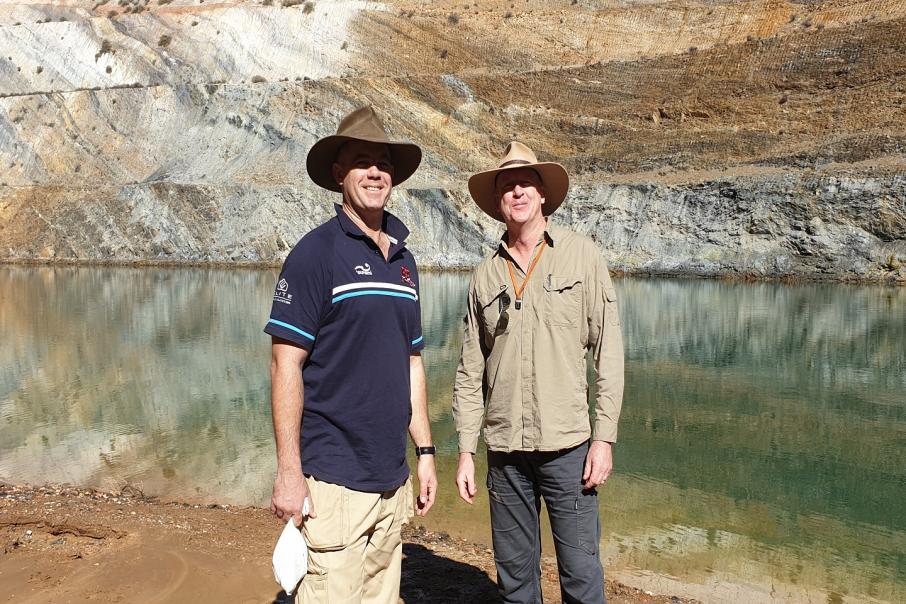 Kingwest Resources recent Menzies acquisition looks like it might provide a payday for the ASX listed junior with ounce plus hits spinning off the drill bit. Latest results include 0.3m grading 71.3g/t within a broader zone of 1.5m grading 14.33g/t. This gold hit is located an impressive 100m below the known mineralisation at the historic Lady Shenton mine, potentially extending the length by at least 100m.

Lady Shenton was the first lease to be taken up by gold pioneer Leslie Robert Menzies in 1894 and later delivered 191,000 ounces grading an eye-watering ounce to the tonne.

Kingwest’s project area is littered with over 5,000 historical workings, with the remnants of these excavations providing quite a visible target on the surface for the Geologists to study.

Innovations in applied geological science and drilling technology are showing that these long-forgotten rich gold lodes continue at depth and are often found to repeat themselves.

Kingwest’s latest drill hole that intersected the Lady Shenton deposit 100m below the previously defined “end” of the lode, unexpectedly deviated south as it was drilled, according to the company. Advanced technological instruments are used in modern drilling practices and enable Geologists to survey and visualise the location of the drill hole in 3D space.

Getting a rig’s 2-inch drill bit to pierce a lode precisely at depth is no easy feat, especially when drilling deep.

Although the drill hole that intersected Lady Shenton deviated south, on the way down it drilled through a previously unidentified lode, over 100m west of Lady Shenton. The new lode returned 2.90m grading 5.84g/t gold from 52.1m downhole and includes 0.30m grading 45.8g/t gold.

These high-grade lodes might appear narrow at first – however, keep in mind the historical production at Menzies was around 800,000 ounces at a portly 19g/t gold, including a portion of underground gold production at practically obese grades of 22.5g/t.

Kingwest says that the drilling to date has well met its expectations and the rocks are directly comparable to other high-grade narrow gold mines such as the nearby Kundana with its impressive resource of 1.4 million ounces grading 4.8g/t gold and an average width of just 0.65m.

The aim of the drilling program for Kingwest is to get a firm hold on the geology in addition to testing high-grade extensions to the existing Lady Shenton, Yunndaga, Pericles, Selkirk and Lady Irene deposits.

The drilling is also highlighting the exploration potential of Kingwest’s Menzies project and providing a solid base from which to validate the existing resources put together by the former owner, Intermin.

So far, 6,440m of drilling has been completed at the project with a further couple of weeks still to go before the rig wraps up for the year.

While the rods have been turning, the Geologists have been fishing through the historical data and have identified that more than an astonishing 5,000 artisanal workings exist across Kingwest’s Menzies gold project – some of these workings form clusters along trends that have not been followed up in decades.

The review also identified a previously unreported 700m deep vertical diamond hole at Yunndaga, drilled sometime in the 1930s, which intersected 2.4m grading 14.7g/t gold from 562m downhole. This intersection is the deepest known to date and not surprisingly has tickled the interest of Kingwest who is planning to follow it up in the new year.

The company has unleashed a flurry of activity since picking up the project and has flown a new aeromagnetic survey over the region that has provided an incredible amount of detail from which the Geologists can glean invaluable geological and structural information.

An aeromagnetic map is a very useful tool to predict repetitions and likely positions of undiscovered gold deposits elsewhere.

Grade is certainly King at Menzies – just need a bit of scale and it will be off to the races for Kingwest followers.