Melbourne duo looking to add some colour to the west end

AMID the clamour for a more cosmopolitan approach to the café and cuisine culture in Perth, a new CBD venture has opened without much fanfare, but with a whole lot of Melbourne vibe. 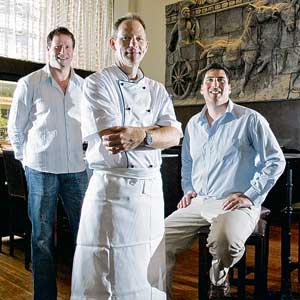 John Ahern and Steve Garcia are dividing their time between Perth and Melbourne as they get The George up and running, while Brad Hatfield has come on board as head chef

AMID the clamour for a more cosmopolitan approach to the café and cuisine culture in Perth, a new CBD venture has opened without much fanfare, but with a whole lot of Melbourne vibe.

The George, located in the former Commonwealth Bank offices in St George Terrace's London House will add new life to the west end of the city, which has been undergoing something of a culinary and nightlife revival in recent years.

With a growing number of small bars and other venues already operating, it is hoped The George will complete the picture and bring even more people into the CBD after office hours.

Opened this week, the new venue is an upmarket bar and restaurant with a plush yet urban feel.

And ironically for those wishing Perth could be more like Melbourne, the partners behind The George, John Ahern and Steve Garcia, are from the Victorian capital, where they work together on a number of bar and restaurants.

It is the first time the pair has set up a business outside Victoria, but they agree the opportunity in Perth was too good to miss.

"We wanted to grow nationally and Perth is a very exciting market. We want to be part of the growth that the city is experiencing," Mr Ahern told Gusto.

The pair says the sunny weather and friendly people also helped in the decision to start a business in WA.

Messrs Ahern and Garcia spent the past two years looking for venues around Perth, and the former Commonwealth Bank space on St George's Terrace was the perfect match.

"This venue married to our vision; the part of town where it is located which is perceived as white collar and the venue itself married each other," Mr Ahern says.

"We were also lucky that our landlords [Hawaiian] were actively supportive of our vision; they've been extremely supportive and patient."

They were able to negotiate a long lease agreement for the site - although details were not disclosed to Gusto - which enabled them to invest a significant amount in the new venue.

The refurbishment cost the two business partners more than $2 million.

And such a big investment, Mr Garcia says it is vital to stay hands-on when it comes to running the business.

The partners have come to a fly-in, fly-out agreement, whereby Mr Ahern spends half of the week in Perth and Mr Garcia the other half.

"We made a commitment to Perth. We are a hands-on business based on relationships; we always knew we had to be hands-on and make an investment in time and money to cement the relationships," Mr Ahern says.

Brad Hatfield, who has spent the past six years as executive chef of the Rydges Hotel, was appointed head chef of The George.

"We are aiming to bring the theatre back in the restaurant by providing a total experience, which I think Perth has lacked with the exception of a couple of venues," he says.

Mr Hatfield believes The George will attract more people in the city by becoming a destination itself.

"We have a well dressed, groomed and trained staff and we want people to walk out with a fantastic experience," Mr Hatfield told Gusto.

The venue has an alfresco area on the St Georges Terrace side and goes all the way to the back of the London House, where a very urban beer garden with a barbecue has been set up.

"With the barbecue we are looking at using it for sundowners and cocktail parties. I don't think there's another venue that can do that the way we can," Mr Hatfield says.

The inside of the venue has a sleek and cosy feel with several intimate leather booths dotted around the place.

The George also has a wine bar flavour to it, with walls displaying some of the hundreds of vintage that are available in the new venue.

Mr Ahern says the venue has a strong focus on beer, too, as it stocks one of the largest varieties of international beers.

The venue offers tapas style bar snacks, upmarket and is looking at introducing a degustation menu.

The George has a tavern licence and a capacity of 360 people.