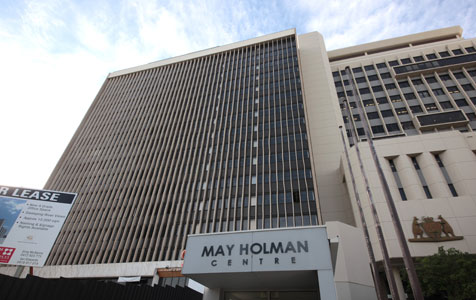 The long-vacant May Holman Centre is poised to undergo a $100 million transformation after owner Golden Group this week secured an anchor tenant for the St Georges Terrace office tower.

Legal Aid WA is understood to have signed up to a lease for about 6000sqm in the renovated building, which will ultimately support about 15,000sqm of office space and be relaunched as Golden Square.

Details of the deal are scant but leasing analysts agree Legal Aid WA represents a very attractive tenant in the current market.

Supported by a combination of state and federal funding, Legal Aid is currently housed over six floors in the Colonial Building at 55 St Georges Terrace.

A shift to May Holman at 32-34 St Georges Terrace would move Legal Aid closer to the District Court on Hay Street as well as the city’s major legal chambers.

This lease agreement will breathe new life into the May Holman Centre, which has been vacant and increasingly derelict since 2008.

The Mimi Wong-chaired Golden Group added the office tower to its commercial portfolio in June 2010 in a deal worth about $30 million.

A development approval for the site is in place and one senior leasing agent said initial construction work was likely to start within weeks.

The redevelopment will extend the floor plates of the existing tower as well as adding new floors to the top of the building.