Twenty Seven Co has wrapped up a 31 hole RC drill program that intersected a 4m envelope of massive sulphides at its Rover gold project approximately 25 kilometres southeast of Sandstone in WA. The company says Rover has the potential to host volcanogenic massive sulphide targets given its similar geology and location only 30km north of Cobre Limited’s Perrinvale base metals project. 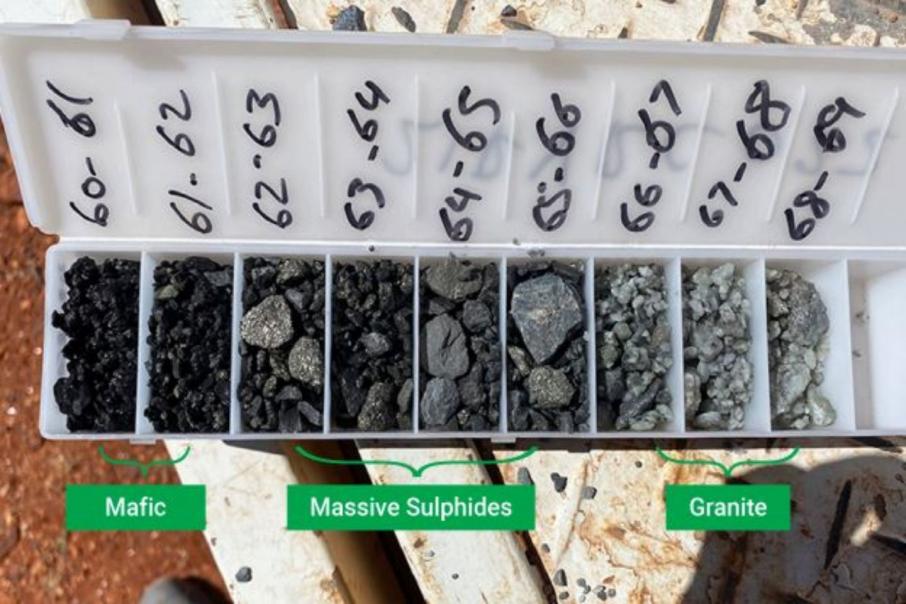 Twenty Seven Co has wrapped up a 31 hole RC drill program that intersected a 4 metre envelope of massive sulphides at its Rover gold project approximately 25 kilometres southeast of Sandstone in Western Australia. The company says Rover has the potential to host volcanogenic massive sulphide targets given its similar geology and location only 30 kilometres north of Cobre Limited’s Perrinvale base metals project.

The recent drill program at Rover consisted of 2,161m of RC drilling and yielded 574 samples that will be dispatched to the laboratory this week with results expected during the first quarter of 2022.

Significantly, one hole in the program intercepted a 4m wide parcel of massive sulphides consisting of pyrite and pyrrhotite within a 7m zone of disseminated sulphides.

The massive sulphide intersection is of particular interest given its proximity to ASX-listed Cobre Limited’s Perrinvale project just 30km to the south. Mineralisation at Perrinvale has shown an association between massive pyrite mineralisation and base metal prospectivity according to Twenty Seven Co.

Perrinvale has produced some serious massive sulphide mineralisation at shallow depth including 6m grading a dazzling 8.93 copper, 3.1 grams per tonne gold and 3.52 per cent zinc as well as coughing up silver and cobalt credits.

The geology encountered at Rover was consistent with Twenty Seven Co’s  geological model and intercepted mainly basalts, dolerites, granites and banded or silicified iron formations with some potential ultramafic sequences.

Six of the 31 holes drilled were designed to extend the high priority Harmonic prospect at depth and along strike. The other 25 drill holes targeted the soil sampling anomalies identified in November at the Middle Well, Four Corners and Blue Hills prospects along strike from Harmonic.

Twenty Seven Co aims to review results from recent drilling in addition to a series of previous surface geochemical samples identified in the Rover project area from the WA Department of Mines “WAMEX” database. Geochemical data together with drill data will be incorporated into the Rover geological model to plan further infill geochemical sampling across the area, if required.

“We are pleased to have completed this drilling program at Rover ahead of the Christmas break, as it allows us to submit our samples to the laboratory this week for processing.”

“We expect to receive first results in around 5-6 weeks’ time and look forward not only to delineating further gold mineralisation but also to the results of assays for Hole 21RVRC022 given its encouraging intersection of a 4 metre-wide zone of massive sulphides.”

Having previously identified its Harmonic and Creasy prospects through soil sampling, Twenty Seven Co are looking set for an exciting start to the new year with a stocking full of drill results waiting to come back from the assay lab following up similar geochemical anomalies.