Mandurah needs to raise the bar in hospitality ... Pronto

KERRY and Tracy Brown have a message for their fellow hospitality and tourism operators in Mandurah - lift your game and prepare for an influx of business. 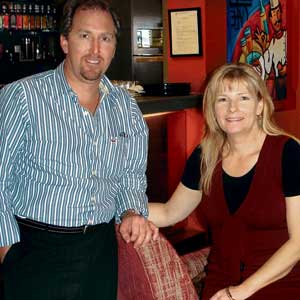 Kerry and Tracey are committed to improving the quality of their offering at Cafe Pronto, and hope the entire hospitality sector in Mandurah will do the same

KERRY and Tracy Brown have a message for their fellow hospitality and tourism operators in Mandurah - lift your game and prepare for an influx of business.

The owners of Café Pronto, who reckon they brought a new standard in service to Mandurah when they opened their café-cum-restaurant-cum-brasserie 11 years ago, say the community needs to work together if the town's potential is to be fully realised.

Improved access to Mandurah, provided by the Kwinana Freeway and now the rail line, has made it imperative that local businesses get their act together.

"In Mandurah, we're going to become more of the Perth metropolitan area and I think it's really important that cafes and restaurants keep up with it," Mrs Brown says. "We're doing extremely well. As far as the other restaurants go, they're doing well as well, but as a community we can go further."

"We're looking to a much bigger summer this year, we have a lot of confidence in Mandurah and the train is just one other thing that will make Mandurah a very important day-trip destination," he says.

"We were finalists in the Restaurant and Catering Industry awards country dining last year and we lost to Kate Lamont by only 0.25 of a per cent," she says.

The couple started Café Pronto in 1993 but sold the business two years later to buy a village resort in Mandurah.

Then, in 1997, Café Pronto, then renamed the Old Bridge Restaurant, came back on the market. The Browns say they couldn't resist buying the cafe they had sold five years earlier.

"We've always been really passionate about the food and the wine, and the customer service, we just really love that," Mrs Brown says.

"With the holiday village it was a seven days a week, 24 hours a day job; we wanted to extend our family and get a bit of balance there."

The Browns sold their resort village business two years ago.

Last year, the couple completed a $1.7 million renovation of Café Pronto; the venue now has a very open and modern look and features a large beer garden at the back.

Mrs Brown says although they tend to put more modern items in the menu, the selection has to remain varied to fit with a wide range of customers.

"We have to cater for everybody, there is broad range of people here [Mandurah]. Some of our dishes are definitely more flamboyant and that gets the people who have a little bit more money than others, but we also have the simple dishes," she says.

Mr Brown says Mandurah was a niche market in 1993 when they bought the café, and it still is.

"There was nothing like this [Café Pronto] in town in 1993 when we bought it, there was nowhere to go nowhere to eat in Mandurah after 8pm.

"What we offered was so unique; we were baking our own cakes, the coffee, what we offer as far as food was totally unique and we did a roaring trade."

The couple expect more venues to open in Mandurah in the near future, with two new, as-yet untenanted, restaurants being built across the road from Café Pronto.

Mr Brown says being a hospitality business in Mandurah can be challenging when it comes to sourcing specific ingredients.

"A lot of products are extremely hard to source mainly because we don't have the providers as there are in Perth...there's no running down to the Re- Store or the specialty Asian shop at the last minute. You've got to make sure you've got all the ingredients you need," he says.

Café Pronto is located on the corner of Mandurah Terrace and Pinjarra Road, overlooking the Old Mandurah Traffic Bridge.

Although it is a 300-seat venue, Café Pronto has a cosy and intimate feel.

The restaurant was recently granted a tavern licence, and is open from 7 am until late seven days a week.

The modern-Australian inspired menu is complemented by locally roasted Rubra coffee. And, if you're lucky, your brew will be made by the Peel Region Barista of the year, Briony McNally.