Anglo Australian Resources seemingly can't miss at its Mandilla project near Kalgoorlie in WA after it again hit eye wateringly long gold mineralised intersections at the project during infill drilling. With gold now looking to be settled at well over A$2,000 per ounce, Anglo’s latest hits including 45m grading 2.33g/t gold from 82m downhole are looking seriously lucrative. 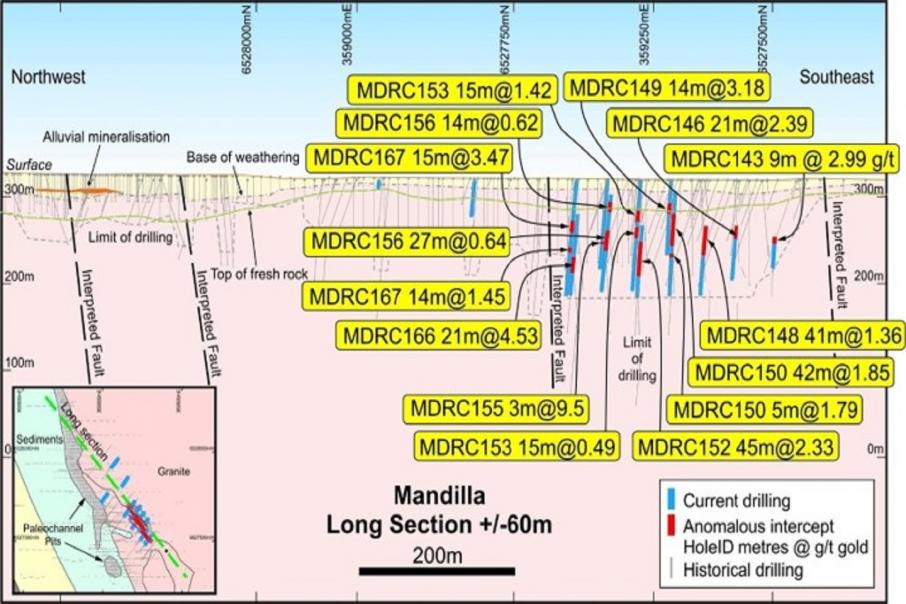 Anglo Australian Resources seemingly can't miss at its Mandilla project near Kambalda in WA after it again hit eye wateringly long gold mineralised intersections at the project during infill drilling. With gold now looking to be settled at well over A$2,000 per ounce, Anglo’s latest hits including 45 metres grading 2.33 grams per tonne gold from 82m downhole are looking seriously lucrative.

Anglo’s new management team led by Metallurgist, Marc Ducler, has its hands full at Mandilla as it tries to get a handle on not only the orientation of the ore body, but just how big it might be.

Other notable intercepts from the most recent drilling include 42m grading 1.85g/t from 45m and 41m grading 1.36g/t gold from 59m downhole.

Mandilla already has a 38,000-ounce gold resource that was defined back in 2013, however, it is now starting to look a little pale in light of the recent 40 plus metre intersections.

The Mandilla gold mineralised trend extends for some four kilometres across the Mandilla West, Mandilla East northern extension and the Mandilla South prospects.

Anglo’s new Managing Director, Marc Ducler said: “These exciting new results provide further support for our belief that we have a substantial gold discovery on our hands at Mandilla, right on Kalgoorlie’s doorstep”.

With a completely fresh set of technical and geological eyes on the project, the new Anglo team is still in the process of interpreting the geology and it is will most likely be particularly keen on pinning down the orientation of gold mineralisation and determining whether it forms parallel lodes.

Mr Ducler said: “With our ongoing geological interpretation and the imminent recommencement of diamond and RC drilling, we are confident we will be able to further improve our understanding of the mineralised system at Mandilla and our future drill targeting”.

The Mandilla West zone is a new prospect – possibly a parallel lode – that currently spans about 800m in length. Mandilla West was defined recently by three RC “pre-collars”, completed in preparation for the diamond rig that was to target deep zones at Mandilla East – one diamond hole has now been finished to a depth of 283m.

Assays are still outstanding, however, Anglo said that that the drill core looks ok, with signs of Mandilla-style gold mineralisation such as quartz veining and pyrite alteration present.

It is difficult to know just how many ounces further drilling may be able to squeeze out of Mandilla and expect lots more holes to be put down before this question is definitely answered – but one thing seems certain, 38,000 ounces will likely just be just a distant memory after the rods stop turning.